Home » Fashion » At the Oscars of American Fashion, Lots of Winners, Less Relevance

So much for politics. After two years in which the CFDA awards — the annual celebrity-and-model-infused “Oscars of the Fashion World” bestowed by the Council of Fashion Designers of America — had celebrated and called out the need for diversity, the power of immigrants, the rights of women and questioned the very meaning of what it was to be a designer; on an evening that symbolized the turn of an era as Diane von Furstenberg, the longtime CFDA chairman, passed the torch of leadership (literally) to Tom Ford; at a ceremony where more designers of color were nominated for awards than possibly ever before, the winner was … the status quo.

It started off promisingly enough. On Monday night at the Brooklyn Museum, as the sun set over Prospect Park and guests finally took their seats in the rotunda after two hours of air-kissing, Hasan Minhaj of “The Daily Show” appeared on stage to present the Menswear Designer of the Year award. And he began by poking pointed fun at Gucci for “putting white guys in turbans,” a reference to a recent cultural appropriation brouhaha that suggested the show would not be without currency.

But then Rick Owens, the American designer in Paris who won the Lifetime Achievement Award back in 2017, got the prize — beating out Virgil Abloh, the most nominated designer, who went home empty-handed (kind of like Jay-Z at the 2018 Grammys). And so it went. 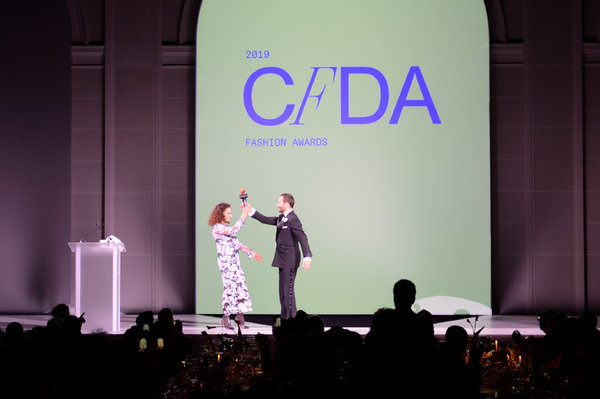 In presenting Sarah Burton of Alexander McQueen with the Valentino Garavani and Giancarlo Giammetti International Award (on the same night that the Duchess of Cambridge wore a McQueen gown to the state banquet with President Trump in London), Anna Wintour showed a family wedding picture, of the gown that Ms. Burton made last year for Ms. Wintour’s daughter, Bee.

Barbie, the Mattel doll celebrating its 60th birthday this year, won the Board of Directors’ Tribute, a recognition that previously went to Michelle Obama, Gloria Steinem, Mayor Michael R. Bloomberg and Cecile Richards of Planned Parenthood.

Though, while accepting on behalf of the doll, Lisa McKnight of Mattel pointed out that Barbie had been an astronaut before a man went to the moon, and president before “a woman won the popular vote,” it was hard to get away from the sense that a plastic toy was not quite the same thing. Especially one that, despite coming in numerous iterations, is still most famous for being Caucasian, blond and the sort of female shape that exists only in virtual reality.

They were such familiar names on this particular podium (Bob Mackie won the Lifetime Achievement Award), the announcement that Brandon Maxwell, the maestro of Lady Gaga’s four-in-one Met gala look, won the Womenswear Designer of the Year award, practically qualified as an upset — even though he also took home the Emerging Womenswear Designer trophy in 2016.

In any case, Mr. Maxwell’s name was met with many cheers, as was his emotional speech, in which he announced he had not expected to win and so had been taking full advantage of the free bar, revealed his pants were too tight, and celebrated being “part of an industry like this where we wake up every day charged with the idea that making a woman feel good, that making someone happy, is valid.”

Introducing her, Mr. Ford had hailed her as a pioneer of the body positive movement, though the closest anyone got to really taking a stand on an issue of the day was Eileen Fisher, who was given the Positive Change Award for her work in sustainability. And though she did acknowledge that fashion as an industry was in no way sustainable, instead of excoriating the people in the room, she simply asked them to engage with the problem, and think about what they could do.

Maybe that was a clue to the import of the event: In a world that is increasingly angry and divided, this was a time for an industry to just come together and make nice. But while inclusivity and a warm, cuddly embrace is important, is it enough?

New York fashion — American fashion in general — is in the midst of an identity crisis. The old guard is treading water, and a new generation (many of whom, including Telfar Clemens, Mr. Abloh and Kerby Jean-Raymond of Pyer Moss were nominated, but none of whom won) is coming to the fore, wrestling with entirely different ideas about what role fashion plays in the world.

By avoiding the topics that have the most urgency, whether gender fluidity, the tension between digital and material culture, race or women’s rights over their own bodies, and the designers trying to remake those narratives, the CFDAs also avoided controversy. And risk.

As a result, after Ms. Lopez finished her speech and the attendees melted into the night and their Ubers, it was hard not to feel that despite all of the winners, something had also been lost: relevance.

Vanessa Friedman is The Times’s fashion director and chief fashion critic. She was previously the fashion editor of the Financial Times. @VVFriedman