Home » Fashion » A Conversation With the ‘Queen of Cake’

Sylvia Weinstock is known among fans as the “queen of cake,” for her ornate, colorful and realistic confectionery designs. But she didn’t start out in the baking business.

“In 1975, I went skiing with my family. I don’t like to ski, so I baked instead,” she said. A former schoolteacher, she didn’t bake professionally until she was 50, after surviving breast cancer.

Ms. Weinstock, an 89-year-old Brooklyn native, was a judge for the Netflix series “Nailed It!” (and nearly stole the show from the first episode).

“The first cake I sold professionally was a single-layer cake filled with sugar flowers,” she said. “It was for a private party at the Carlyle Hotel. Then I went to two-tier cakes. The tallest I’ve made was 10 feet and had thousands of flowers.”

She began specializing in wedding cakes after William Greenberg Jr., an Upper East Side baker in the business since 1946, passed on orders to her. (He didn’t do wedding cakes.)

Ms. Weinstock had a shop on Church Street in Manhattan that closed in early 2018, after her husband, Ben Weinstock became ill. (He died in May 2018.) She has baked cakes for numerous high-profile clients like Michael Douglas and Catherine Zeta-Jones, Billy Joel, Mariah Carey and Sofía Vergara.

In May, she began collaborating with the Parisian pastry company Ladurée on a line of wedding cakes and mini desserts called Sylvia Weinstock Pour Ladurée.

What kind of cake did you have at your wedding?

A honey cake, which we bought. I was 19, my husband, Ben, was 24. I was so young I couldn’t even have a cocktail. We were poor, college kids. We got married at a Jewish seminary in Manhattan in front of 20 people.

How did your business start?

William Greenberg told me I should go into the cake business. So I did. In 1980 we did cakes by appointment in a little brownstone. When I closed the store on Church Street, we had three floors and more than 15 staffers. One floor was used to greet people and where the flowers were made. Baking, icing and cake structure was done on the third floor. The elevator would take the cakes to the basement, which we turned into a walk in refrigerator. I lived on the fourth and fifth floors. 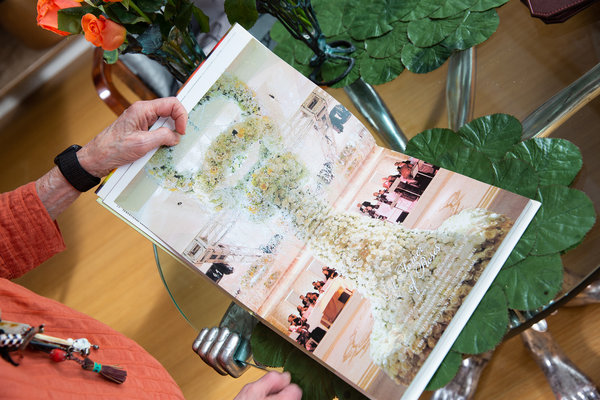 How many wedding cakes did you make a year?

What are some of your clients’ more unusual requests?

We’ve done carved cakes in the shape of a Bentley with the bride and groom figures sitting in it; a copy of the house the couple bought with a for sale sign saying, Just married; a wine crate with six wine bottles in it. We painted the wine labels, which said, From the estate of … with the parent’s name and then the couple’s name; a box with shoes inside for Steve Madden.

Have you ever had a cake emergency?

Ten years ago I was sitting down to dinner and I got a call from the banquet manager. It was 7:30 on a Saturday night. He told me someone bumped into the screen that was protecting the cake, which he said needed help. I went to the Pierre Hotel with extra flowers and icing. I fixed what I could and turned the cake around. We got away with it. The bride didn’t even know.

Did clients come in with visuals?

The mothers of the bride, who started thinking about their daughter’s wedding the minute they had a girl, would bring tear sheets from magazines with wedding cakes on them. These could be 10 years old. I’d use them for inspiration and a jumping point. It gave me a good idea of their taste level. You never want to duplicate something. You always want to create your own. Then I’d sketch out their cake, maybe add watercolor to it. They usually kept this afterward. We’d also do a sampling of cakes. The one-time meeting would last an hour.

What best advice can you offer?

I caution brides, You’re the host. You want something that pleases the palate of your guests. If you do multilayers you can have multiple cakes. You could do three different layers so everyone has a variety. If they can’t eat one, they can eat the other. And if you have a cake with nuts, you need an alternative for the people who can’t eat them. Once the cake is placed on a sturdy table, it shouldn’t be moved because it can collapse.

What’s the biggest change you’ve seen in the cake business?

We have a lot of imitators who think they are pastry chefs, but aren’t. They don’t have the skill or use the same high-end ingredients. Most use fondant. I hate fondant. It’s cheap and easy. We only use butter cream. They don’t know about the different qualities of butter or cream or eggs, or that everything matters when baking in portions. You need to know about the material you’re working with besides being creative and making it beautiful.

Can someone really make his or her own wedding cake?

You can, but don’t. You have too much on your mind. A day or two before your wedding is not the time to start baking.

What do you love most about this business?

The cake is a showpiece. It’s second to the bride. Most people can’t remember the food, music, or flowers, but they remember the cake 30 years later. That gives me great pleasure. I gave them something memorable. I have a moment in everyone’s wedding, which fills my heart.

Do you have a favorite moment?

The cutting of the cake. It’s the first act of something sweet that you do together as a couple after the ceremony.