I know it’s been, like, a million years since we had an update on Lucy Hale’s dating life, so here it goes—after being single as a Pringle following those rumors she was dating former Bachelor Colton Underwood, she was then spotted kissing Skeet Ulrich—better known as FP Jones on Riverdale—back in February. They had a little Instagram flirtation, as celebrities tend to do, but then all mentions of Lucy and Skeet vanished. What happened?

Well, according to E! News, Lucy and Skeet have ended their little fling less than two months after their kissing pictures hit the web. No need to weep over their time together coming to an end—it didn’t seem like they were ever that serious to begin with. 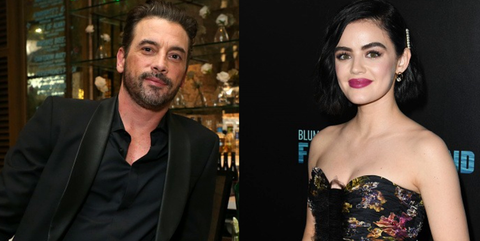 “Her and Skeet had a very brief romance and were seeing each other for about a month but aren’t dating,” E!’s source said. “They are still friendly and in touch, but it’s nothing serious. They aren’t consistently seeing each other, and Lucy is focusing on herself right now. She’s very much single but thinks Skeet is a great guy.”

This update on Lucy and Skeet is quite the opposite of the one we received when reports of a maybe-relationship started making the rounds. “They know a lot of the same people in the acting circle and connected recently,” an insider told E! in February. “It’s very new. They are both really into each other and have been dating for about a month. It’s pretty casual, but they are having fun and have been seeing each other frequently.”

In the great words of Queen/Freddie Mercury, another one bites the dust!

You love all the deets on the celebs. So do we! Let’s overanalyze them together.