For a time, it appeared that conservative Meghan McCain had quite the soft spot for former vice president-turned-Commander-in-Chief Joe Biden. Never forget the on-air moment in which Biden famously comforted McCain regarding her father, John McCain’s, recent glioblastoma diagnosis — the same disease that eventually took the life of Biden’s son, Beau Biden. During the touching moment, Biden recalled how the senator took special care of his son during his time as a military aid worker all while “The View” cameras were rolling. “One of the things that gave Beau courage was John,” Biden began. “When you were a little kid, your dad took care of my Beau. Your dad, when he was a mil-aid worker with me, became friends with Beau. Beau talked about your dad’s courage — not about illness, but about his courage,” he recounted fondly as McCain was moved to tears.

Alas, it appears that affection is a thing of the past. McCain now claims she no longer “recognizes” the now-president. But why, exactly? Keep reading after the jump to find out.

Meghan McCain does not agree with Biden's decision regarding the evacuation of U.S. troops in Afghanistan 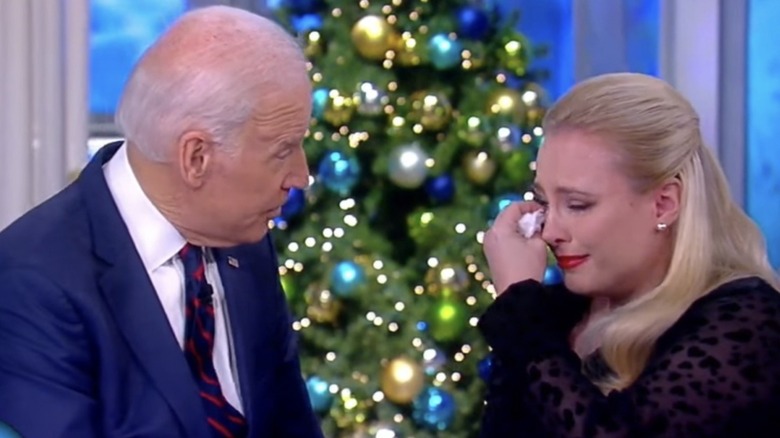 In a nutshell: Meghan McCain is none too pleased with President Joe Biden and his actions and explanation for the evacuation of the United States military from Afghanistan — a decision that ultimately contributed in the tragic loss of 13 U.S. service members.

Upon hearing his remarks in an address to the nation, per the Daily Mail, Meghan McCain penned a scathing tweet about Biden and what she perceived as his abandonment of Americans in Afghanistan. “This is extremely difficult for me to say: I once thought I truly knew Joe Biden and he helped me through pain and grief, for which I am grateful,” she began, before adding, “This man on TV giving this speech, I do not recognize this man. God help our country. God help the Americans we have abandoned.”

In yet another response to Biden’s remarks, McCain said she was both “disappointed and disgusted.” “13 American soldiers are dead – most of them between the ages of 20-23 because they were put in harms way chaotically in the line of fire of a suicide bomber,” she tweeted. “Disappointed and disgusted President Biden says ‘this couldn’t have been done in a more orderly manner.'” Unfortunately, it doesn’t appear these two will be hugging it out on television again anytime soon.