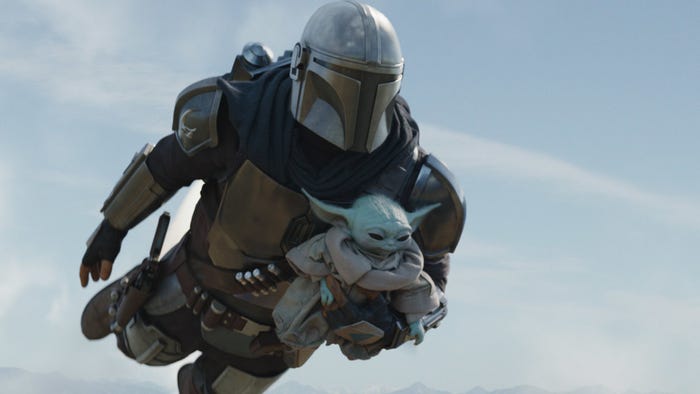 Oscar-winning composer Ludwig Göransson is responsible for the unique music throughout Disney Plus' "The Mandalorian" series, which includes the vast array of woodwinds and heavily produced synthesized sounds in season 1 that gave us the now-iconic gunslinger theme for Mando and rousing end credits score.

Though all of that is still featured prominently during the second season of the series, Göransson and show creator Jon Favreau weren't satisfied. Like the storytelling itself, they wanted the music in season 2 to continue to push the envelope of what could be put on display within the "Star Wars" universe.

With this season featuring the addition of characters like Boba Fett, Bo-Katan Kryze, Ahsoka Tano, and a certain Jedi legend, Göransson had his hands full trying to give each a distinct musical theme. But the Swedish composer says season 2 also gave him the ability to advance the existing score.

"In season 1 it was all new so audiences didn't have a relationship to the music, but now they are connected to these themes," Göransson told Insider. "So when I started season 2 I wanted to use the themes in a different way — different harmonies and counterpoints to the main theme, but in a way that people would still understand what it is."

The result is a musical tapestry that elevates the action we're watching.

Here Göransson talks exclusively to Insider about the process that went into creating some of the new music in season 2 and how he incorporated existing "Star Wars" scores.

One of the most touching moments of the entire second season of "The Mandalorian" is in the finale episode, "The Rescue," when Mando (Pedro Pascal) takes off his mask to say goodbye to Grogu, who is off to learn the ways of the Force from Luke Skywalker (used with de-aged technology and voiced by Mark Hamill).

To get the tone just right, Göransson said he was shown the scene in its rough form by series creator Jon Favreau, executive producer Dave Filoni, and "The Rescue" director Peyton Reed two months before he started work on the music for the episode.

"Just to give me a head's up and create a thought in my head," Göransson said. "Just to get me prepared because it's an important scene."

Even without any music put to the footage yet, Göransson said the scene was powerful.

"I remember seeing it for the first time and I wasn't prepared at all, I was moved by that ending," he said.

Göransson said at the time of seeing the scene he was working on music for "The Siege" episode. As the episodes passed, he continued to think about how to tackle that special moment between the show's two stars in the finale.

Finally, he realized how to do it.

Starting out with the gentle synthesized Grogu theme, by the time R2D2 appears the music turns to a string-heavy score that touches on many of the recognizable pieces of music on the show. It's almost a culmination of what we've been through with these two characters.

"I tied in a lot of the music from every episode and put the themes together in a way that made it feel special," he said.

Before Luke Skywalker enters the bridge of Moff Gideon's (Giancarlo Esposito) ship and reveals himself, we only see him as a lightsaber-wielding hooded figure who has ease cutting through Gideon's Dark Troopers.

This fight sequence is accompanied by a powerful score that Göransson said was intended to build up the mystery.

"I basically wrote a new theme for Luke there because I wanted the reveal to be a surprise, I didn't want to hint at anything," he said. "When you see him show up in the X-Wing there's electric guitar and a children's choir playing. It kind of sets the tone. Then by the end, it's a nice transition from heroic mystery theme into the Force theme."

The music fits perfectly as the blast doors open we hear electric guitar and then it turns to those familiar horns playing the Skywalker theme we've known from the original "Star Wars" trilogy. 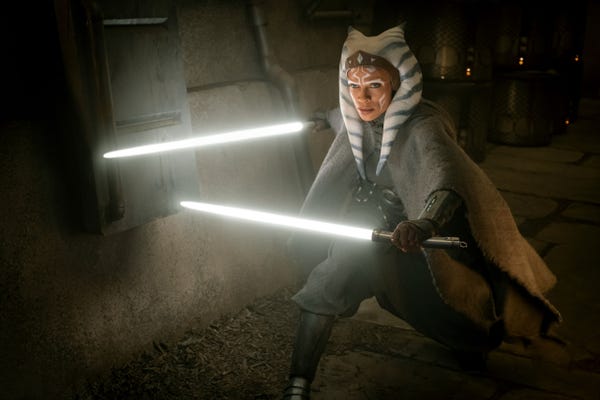 Though there isn't any familiar John Williams-composed "Star Wars" music in the first season of "The Mandalorian," there are a few times when it appears in season 2. Göransson said there was a constant discussion on how to implement it.

"We had a lot of conversations throughout the show," he said. "We were smart with putting our own stamp on the music through season 1 but with season 2 we wanted to flirt with the 'Star Wars' themes a little bit."

The Yoda theme is heard in the "The Jedi" episode when Ahsoka Tano (Rosario Dawson) talks about Grogu and his powers of the Force. And then the Skywalker theme appears when Luke is revealed in "The Rescue." (The Tano theme used is the same from "Star Wars: The Clone Wars" series created by Kevin Kiner.)

Göransson said in both instances they used familiar music from "Star Wars" to give that sense of the history of the franchise in the moment. But he especially wanted it in the Skywalker reveal.

"When Luke takes his hood off we all wanted people at home to stand up on their feet and feel this power," he said. "It was an obvious choice to put it in there at that moment."

Göransson got help from 'The Tragedy' episode director Robert Rodriguez in the creation of the Boba Fett theme, which included a war horn and breathing sounds

In "The Tragedy" episode Boba Fett (Temuera Morrison) comes out of the shadows to make himself known to Mando and demands his armor back. Their standoff is interrupted when stormtroopers from Moff Gideon's ship try to take Grogu. We watch as Fett fights alongside Mando, and it features some of the darkest music in the series.

Directed by Robert Rodriguez, who is known for taking the lead on the scores of his movies, Göransson said the tone of the music accompanying Fett had already taken form by the time he started work on the episode thanks to Rodriguez.

"When he was editing he had already put some weird sounds on top of Boba's character during the fight sequences," Göransson said of Rodriguez.

Between bonding sessions the two had over Zoom jam sessions, Göransson and Rodriguez played with raw sounds effects as their guide for Fett's theme.

"[Rodriguez] wanted something primal for this character, so I just took his initial sounds and thoughts and elaborated on them," he said.

Göransson said Rodriguez featured "some kind of war horn," so to capture the theme he distorted that sound with a didgeridoo and another unique sound.

"I added human breath to make it feel like he's in your head," he said. 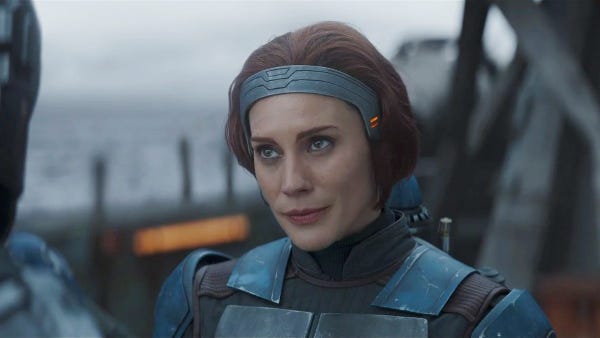 While in search of more of his kind in "The Heiress" episode, Mando gets into trouble at sea when a group of Quarren double-cross him. Thankfully Bo-Katan (Kate Sackhoff) shows up to save the day. And she's accompanied with a fast-paced techno beat as her theme.

"She shows up with such speed and energy, she's just bad a–," Göransson said. "I just knew I wanted something extremely energetic."

To get that feel Göransson said he put together an "industrial heavily produced sound."

"With a lot of the show it's using all these different musical genres and combining them all through production techniques," he said. "With Bo-Katan it's a heavily distorted synthesizer sound running through a gate pattern effect."

The theme for Grogu is music Göransson created before season 1 began filming. 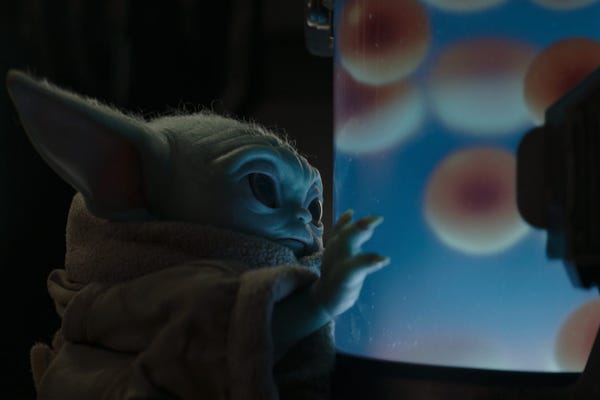 Featured more prominently in season 2 is Grogu's theme, which has a dreamy, gentle sound.

Another episode when it's prominently featured is in "The Passenger" episode when Grogu becomes entranced by the Frog Lady's canister of eggs and presses his face against it.

Göransson said that theme was created by using a Fender Rhodes keyboard.

"It's a keyboard that was often used by Stevie Wonder and Herbie Hancock," he said. "I wrote five or six pieces of music before season 1 and one of those was Grogu's theme with the Fender Rhodes."

Göransson said what he loves about doing music for the show is he's encouraged to continue to come up with creative sounds that audiences rarely hear.

"It's all about creating a unique sound world, that's what it all has been about for every project I've done," he said. "So this sound you hear is only for what you're watching at the moment. I want everything to be fresh."

A 'secret' nuclear missile base that didn't appear on any maps for decades is now a ghost town. Some call

Optimism in Mexico as Biden rolls back Trump’s immigration policies