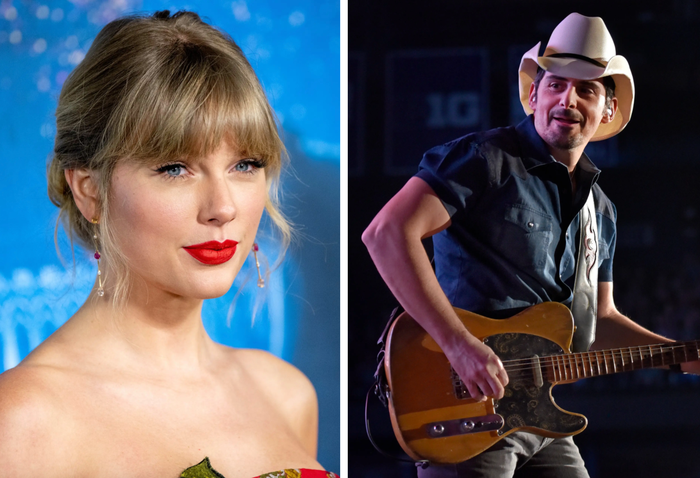 Taylor Swift has been diving back into her country roots on her 2020 albums "Folklore" and "Evermore," but in Nashville, Tennessee she's been scrubbed from a country music landmark.

Legends Corner is a classic honky tonk bar in Nashville that features live country music and a popular mural outside. Unveiled around early 2017, the Legends Corner mural features 14 country stars from past and present. 31-year-old Swift was one of the 14 famous faces up until a few days ago, when WZTV Nashville reported that artist Tim Davis had replaced Swift with country singer Brad Paisley.

The other artists on the mural are Tim McGraw, Loretta Lynn, Blake Shelton, Dierks Bentley, Willie Nelson, Johnny Cash, Keith Urban, Merle Haggard, Reba McEntire, Alan Jackson, George Strait, Dolly Parton, and Garth Brooks. Organizers told WZTV Nashville that two new additions will be included in the mural, and speculation is that another woman besides Swift, Lynn, McEntire, and Parton will be added.

However, the decision to erase Swift wasn't taken lightly by the singer's fans. "Young Taylor ran country" trended on Twitter after Swifties were made aware of her replacement.

Tweets pointed out that Swift was just 23 when she became the youngest recipient of the Pinnacle Award, a rare honor awarded by the Country Music Awards to artists like Swift and Brooks who dominated worldwide charts with country music. Swift received the recognition in 2013 when she released her fourth studio album "Red."

Since then, Swift has deviated from country music to release more pop records, but on 2020 tracks like "Betty" and "Cowboy Like Me" she revisited her country roots.

Swift fans were also eager to point out that her second studio album "Fearless" is the most-awarded country album of all time — including the 2008 Album of the Year award at the Grammys. Nonetheless, the organizers behind the Nashville Country Legends mural saw fit to replace Swift with a different country icon.