NBC’s sketch comedy show made fun of the president’s statements that he is willing to bypass Republican support to offer monetary relief for Americans who have been hurt by the pandemic with a joke about his past scandals regarding personal space.

“President Biden said Friday that he would go on ahead with his $1.9 trillion stimulus plan with or without Republican support, because this economy needs a massage and Joe Biden isn’t waiting for permission,” said “SNL’s” Colin Jost, during the show’s mock news program Weekend Update.

Jost didn’t let up on the new president during the sketch, and followed up his joke with a dig at Biden’s memory snafus with a reference to Sunday’s Super Bowl.

“An interview with Biden will air between the Bucs and the Chiefs, and incidentally ‘buc’ and ‘chief’ is what Biden calls his friends when he forgets their names,” Jost quipped.

The show’s comedic jabs at Biden come a week after critics said the TV program was too afraid to joke about the president.

Later in the scripted program, Jost took aim at former President Donald Trump and the second Senate impeachment trial against him, where members of Congress have alleged Trump incited the attack on the U.S. Capitol on Jan. 6.

“Former social media influencer Donald Trump, he will not testify at his impeachment trial next week,” Jost began. “And I think I speak for all of us when I say, ‘C’mon please. Give us one last show, man. Stop feeling sorry for yourself, put in your extensions and burst into that trial like its Maury Povich and you are not the father.'” 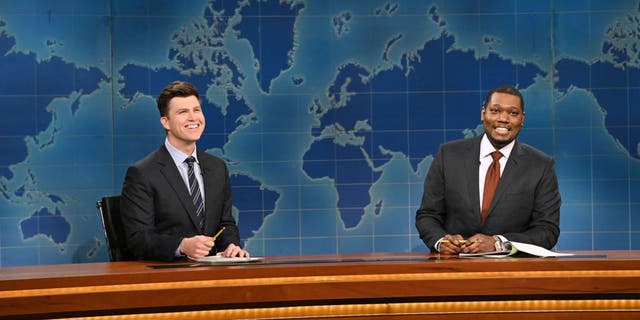 Jost even added that Trump can “yell out” all the things he had saved up for tweets, but was unable to share since the social media platform made the controversial decision to permanently suspend his Twitter account.

Weekend Update wrapped up its jokes about the former president with a reference to his legal representation for the upcoming trial.

“Sadly, Trump is not going to be doing that, but he will be defended by the lawyers who refused to prosecute Bill Cosby and who agreed to represent Jeffrey Epstein before his death,” Jost said. “Which raises the question, what does Trump think he is being impeached for?”