Rostam Batmanglij understands the creative power of a momentary pause. His seemingly endless resume, however, would suggest otherwise. It’s only been eight years since his final Vampire Weekend record as an official band member, and since then Batmanglij has written and produced tracks for the likes of Carly Rae Jepsen and Charli XCX, contributed to Frank Ocean’s Blonde and Solange’s A Seat at the Table in addition to the latest Vampire Weekend record, released his debut solo album, and produced for Lykke Li, Clairo, and HAIM, the latter of which netted him his third Grammy nomination.

Now, he’s driven by a patient resolve: “I just need the time. I always want to make sure the ideas are finished.” Sitting in his sun-drenched home via Zoom, it’s eminently clear that the essential conditions of his creativity are a tight interplay between doing what you love and following your passion.

Every move is a lunge for something greater. This month, Rostam released Changephobia, a sublime sophomore album lauded by critics for its open-hearted honesty, impassioned take on big topics, and saxophone-laden, delirious warmth. And while his debut album as Rostam felt intimate and compassionate, this record takes a leap forward in sharing his personal life experiences as a gay man of Iranian heritage and leaving behind gender pronouns—a move in an industry where conversations centered on nonbinary identities are still uncommon—ensuring any listener can see themselves in the music.

As a balm to all that hard work, Batmanglij decided he’d get a puppy; 11-month-old Rahm sits on the musician’s lap as we chat. The delightful vibes don’t end there, as Batmanglij is set to head off to an undisclosed beach. “The first 30 years of my life, I never liked going to the beach…But I’m feeling ready to go on vacation,” he says with a mischievous laugh.

I was struck by your choice to not use gender pronouns. When you’re thinking about someone you love, I would assume that most people aren’t focusing on this linguistic binary, but on the person. Not referencing gender makes the songs immediately feel inclusive too. Was that instinctual or intentional?

Both. I had this realization that I’ve been asked to hold a certain set of beliefs about gender. As somebody born in ’83, growing up in the ‘90s, I had no option other than to accept what I was told about gender. And so I was interested in rejecting that. Every time you get to make an album, you get to create your own world and you get to have your own set of rules. And in this world, I wanted to reject what I’ve been asked to accept as a kid.

How do you feel about going out in the world and sharing these songs publicly after releasing the album in the pandemic?

Well, I had an interesting relationship with COVID. I got COVID the second week of March 2020 and I spent about four days in bed, sleeping all day and all night. On the fourth day, actually, I still had a fever, but I went to my studio and I wrote one of the songs on the album, “These Kids We Knew”. It ended up becoming the first song on the album.

That’s awful! I’m glad you got over it alright, though. That song reminds me tonally of “From the Back of the Cab” and “Kinney”. Were those all written at the same time? How do they fit together?

“From the Back of the Cab” and “Kinney” were two of the oldest songs on the album. It took me a long time to finish writing them, but they were definitely coming together dating back to 2017.

What is your relationship to your older material? I can imagine sometimes it’s a little like speaking to a version of yourself that may no longer exist. In your case, after the pandemic and isolation and quarantine, do you feel like you can just dip back into old ideas?

Well, it depends. If I have a musical idea and I want it to be on my next album, I’ll usually pick it up and put it down and work on it in different ways over the course of a year or two—or even longer. I keep them all on my Dropbox. When I started this album I found a folder that said “Rostam LP 2”, and it was four MP3s, and two of them were songs that made it on the album. I want to finish the other two for my next record.

I like approaching art without an agenda; it leaves little room to get stuck inside ideas you can’t escape from.

Yeah. If I have a musical idea, it can take on many shapes and forms before it even becomes a song. The process of making an album for me is so much about collecting the musical ideas that I have and turning them into a finished song or a coherent thought. That’s what I find to be the hardest part of album-making. 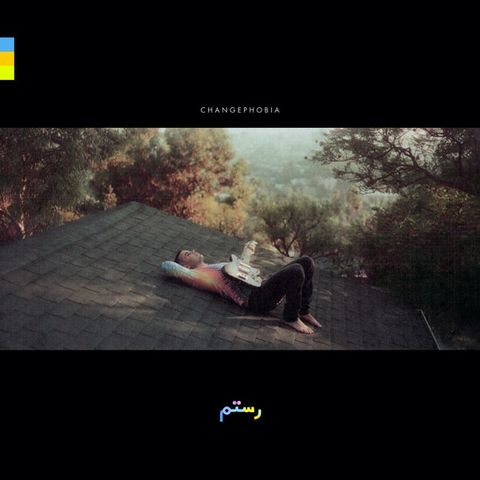 How does that style of work come into play when you’re producing other people? How do you compartmentalize all the ideas?

I find that when I’m working with artists on their projects, the songs tend to start either from something that they make or something that we make from scratch in the studio. In my twenties, I used to make a lot of beats on my own, and those beats sometimes would make their way into songs. [But today] I’m inspired by having the artists sitting next to me. The one exception I can think of is the song “Now I’m In It” by HAIM. That was a beat that I made when I was in Sweden in 2014 or 2015. Four or five years later I got together with Danielle [Haim] and I was like, “I have this beat that I don’t think anybody has been quite right for.” She started singing on top of it and immediately we knew that it was the right fit.

Do you try to foster that collaborative process at all when you’re working on solo projects? Do you bounce ideas off other people? It feels like collaboration is so close to who you are as an artist.

It certainly is. A really stupid way to say it would be that I’m collaborating with myself when I make an album as Rostam. For example, I would say on this album that I knew that I wanted to do a lot of stuff with saxophone. I met [saxophonist] Henry Solomon really early in the process, when I didn’t even have the songs completed. I had sheet music for some tracks for Henry, and for others I was just singing him melodies and he would play them. But then I also found that I liked asking him to just improvise over something he’d never heard before.

Did you feel like you had to share the themes and story behind the songs with him?

You grew up speaking three different languages. Coming from all of that language, when did you realize then that your words would have such an impact on people?

When I was in high school, I wrote a poem and it was published in the literary magazine. When I look back on it, it’s a little embarrassing. It was about how in life there are no U-turns. During our graduation ceremony, the teacher who was giving a speech suddenly started quoting my poem. I was really embarrassed because, looking back on it, it was a really bad poem. It was…I would describe it as angsty.

That said, I think the concept is profound. Don’t you think?

So this goes back to what we were talking about earlier. It’s about concept and execution. [Laughs] It may have been a good concept, but I don’t think I was equipped to execute it yet.

Do you feel pressure to execute big ideas now that you do have the ability? You’re working with so many big names, and as a person of Iranian heritage, as a queer person, do you need a certain strength in the songs that you choose to make?

As somebody who has spent the last seven years collaborating with different people, in addition to working on my own project, it’s important for me to feel like I’m amplifying voices that I resonate with. It would be impossible for me to collaborate with someone whose politics I didn’t resonate with. The point is to amplify the voices of people that I connect with. All music has a political component whether people want to downplay it or play it up. The choices that I make are important and I definitely think the words that I put in songs are very important too.

I’m sure that being able to speak openly and connect the spaces between your heritage, your past, your sexuality, your experiences, your relationships must make that easier.

Whether it’s songs or fiction or nonfiction, we as writers are always figuring out how to express ourselves. As a queer person, the world has certainly become more interested in queer narratives in the last 20 years. When people are not true to themselves, it comes through pretty quickly. Whether it’s gay or straight, the art that is speaking from a place of honesty is the most profound art.

This interview has been lightly edited for space and clarity.