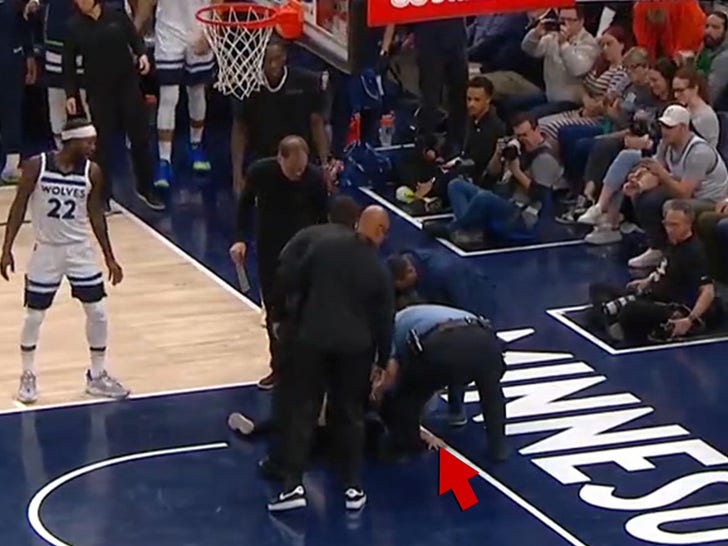 Absolutely wild moment during the Clippers vs. Timberwolves game on Tuesday night — a fan made her way down to the court and glued herself to the floor … and everyone, including the players, was stunned by the sight.

The incident went down in the second quarter of the NBA game at the Target Center in Minnesota … when a woman attempted to stick herself to the hardwood using some Elmer’s.

The woman sprayed the adhesive just underneath one of the baskets as the teams were down on the other end of the court, and then she pressed her hand firmly into it.

When security arrived to get her off the floor — she refused to get up, insisting her wrist was glued down.

Eventually, though, the woman complied with guards and was escorted off the floor.

In a statement released by animal rights group Direct Action Everywhere, officials from the org. said the woman made the scene in an effort to protest Wolves owner Glen Taylor.

The officials accused Taylor and his employees of wrongly killing chickens on his factory egg farm in Iowa. They added that the protestor’s sweater during Tuesday’s game read, “GLEN TAYLOR ROASTS ANIMALS ALIVE.”

Wolves guard Patrick Beverley said after the game he did attempt to help the woman out during the protest … and was praying that she was OK.

No word if the woman was arrested for the stunt … but the Wolves said in a statement that they were “in touch with Target Center Security to address the incident.”