This year’s previously postponed ceremony was held Sunday at Union Station, Dolby Theatre, and many other locations around the world. While Hollywood’s finest impressed on the red carpet, it was the power couples who stole the spotlight. Whether it was another fun night out or making their red couple debuts, these duos brought the glitz and glamour.

Sacha Baron Cohen, who was nominated for two Academy Awards, and wife Isla Fisher celebrated from Sydney, Australia. The Borat star wore a brown-and-cream Ralph Lauren Purple Label suit with an omega watch and cufflinks. The actress, on her end, stunned in a Dior black wool and silk gown with Bvlgari jewelry and Christian Louboutin heels. 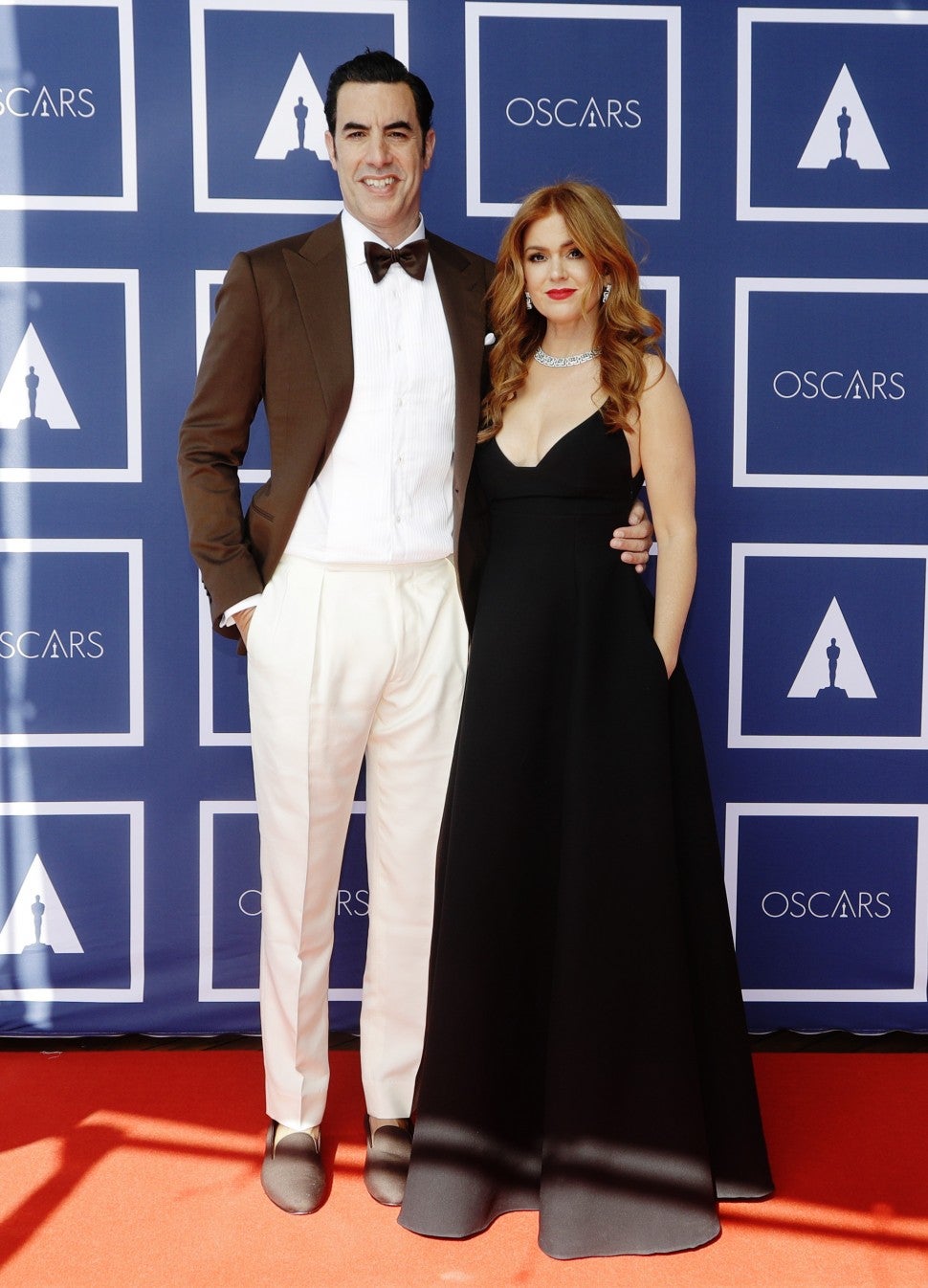 Before posing for their red carpet pics, Fisher was a supportive wife and made sure her husband looked sharp and clean for his big night! 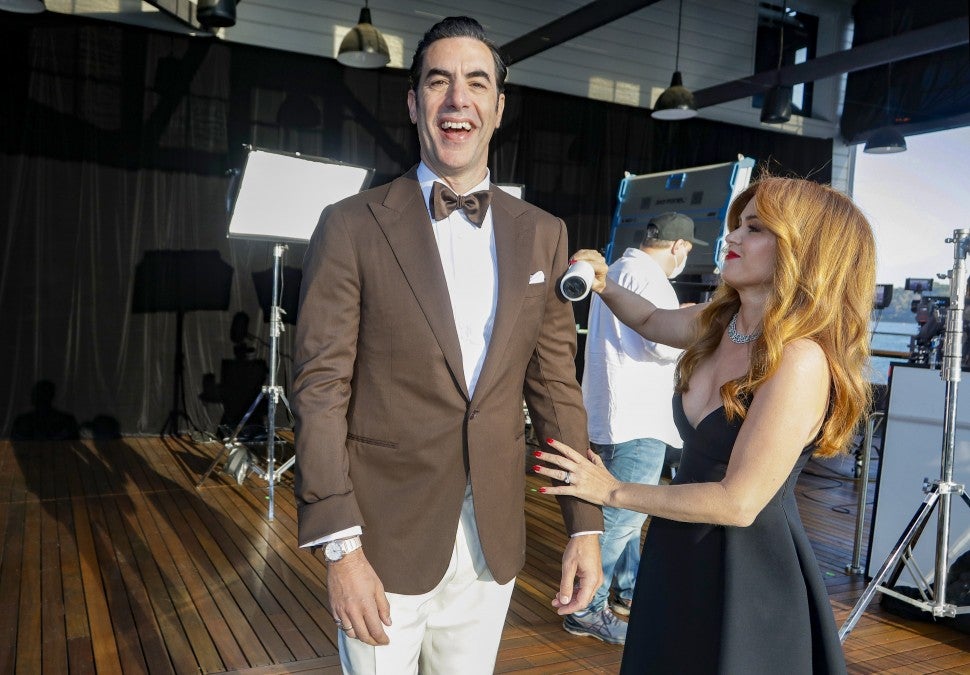 Carey Mulligan and Marcus Mumford were one stunning duo at the awards ceremony. The Promising Young Woman Oscar nominee shined in a gold shimmering Valentino Haute Couture top and billowing skirt. Her date for the night looked handsome in a black tuxedo. 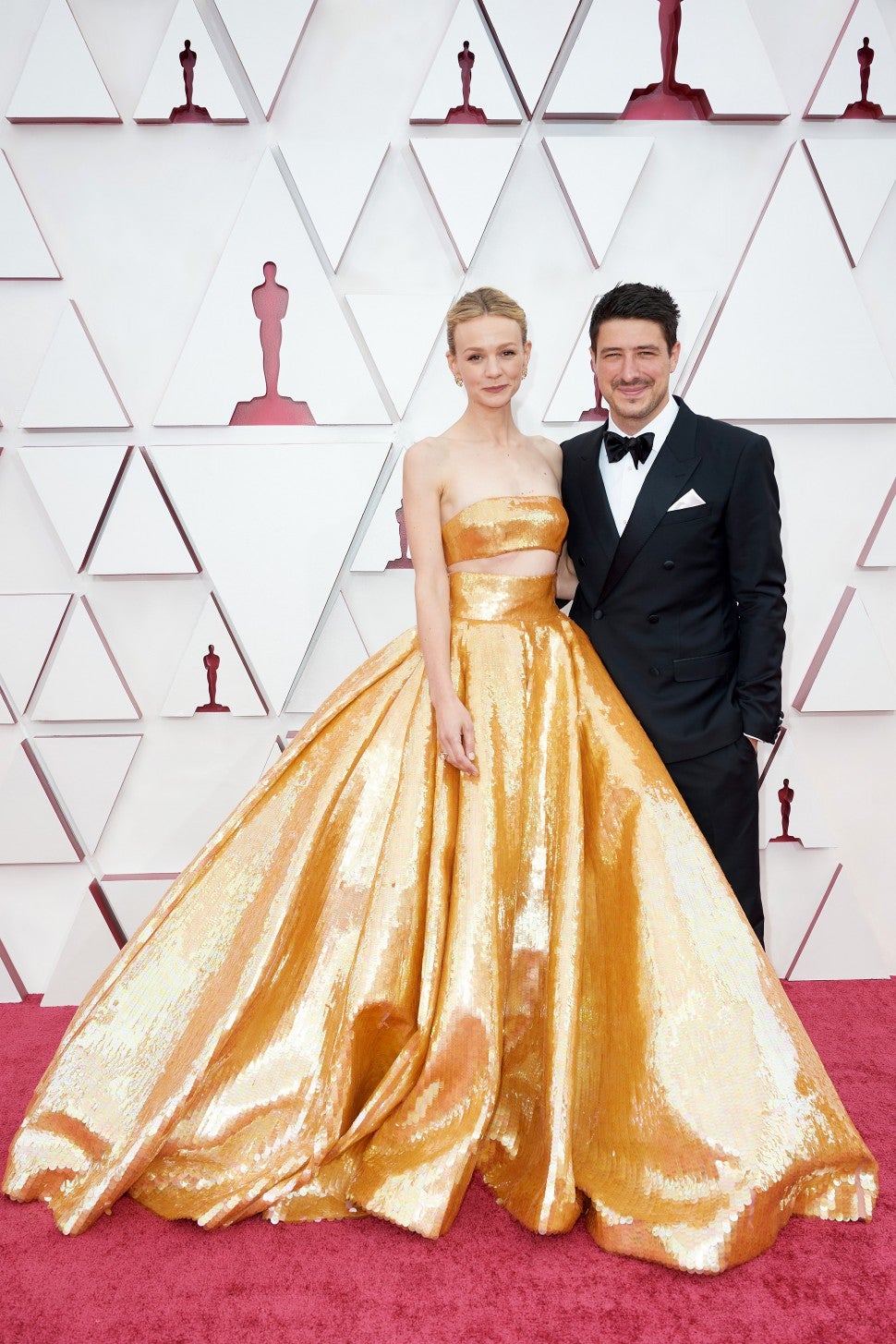 Confirming their relationship in September, Halle Berry and Van Hunt made their first public appearance together. Berry sported a shorter hairstyle while rocking a Dolce & Gabbana gown. The 51-year-old musician, on his end, looked suave in a dark navy velvet suit. 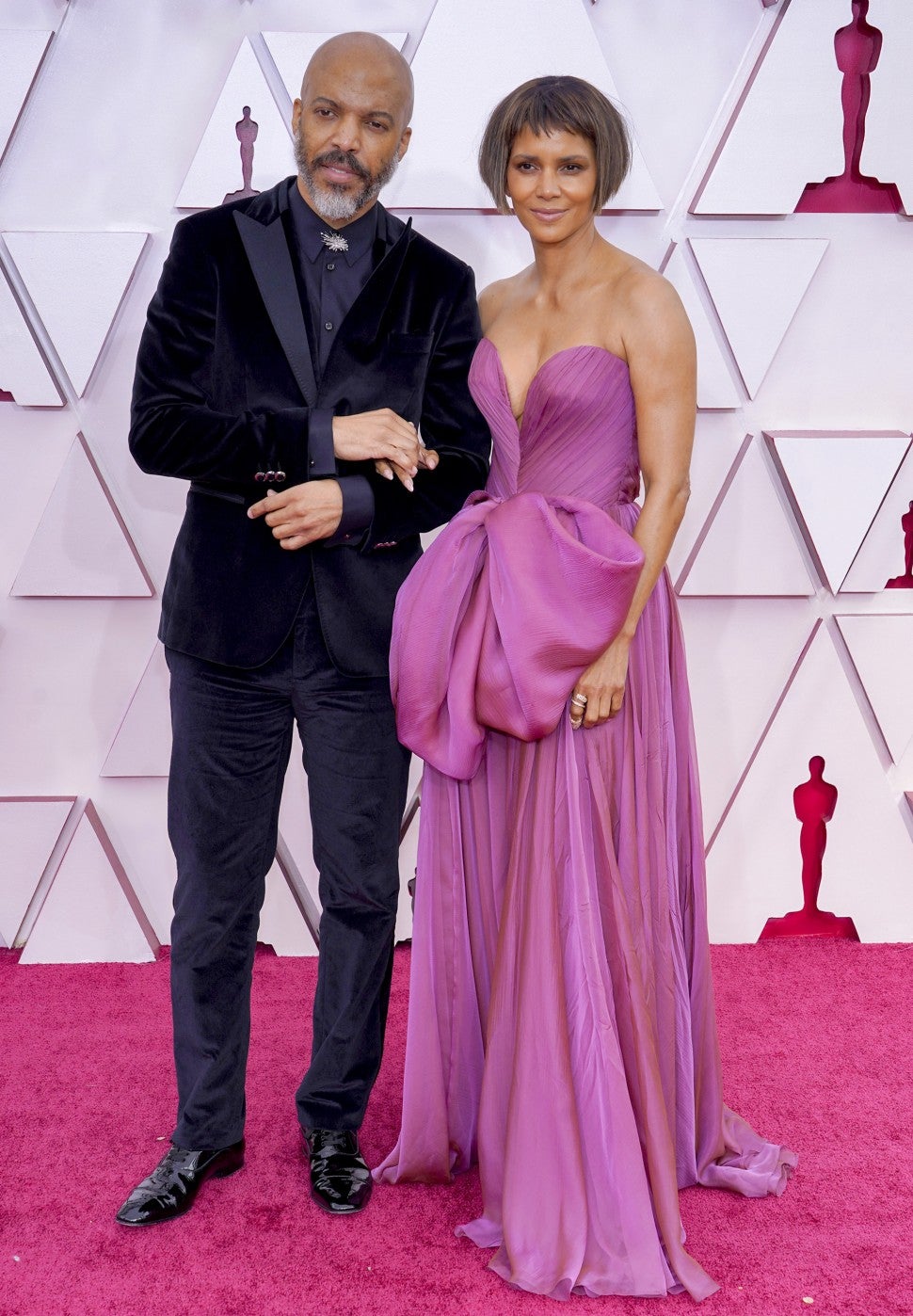 Riz Ahmed and his wife, Fatima Farheen Mirza, also posed on the red carpet together, making their debut as a married couple. The 38-year-old Sound of Metal actor, who’s nominated for Best Performance by an Actor in a Leading Role (his first nomination from the Academy), looked sharp in a sleek black suit by Prada. The novelist looked elegant in an aqua caped Valentino gown. 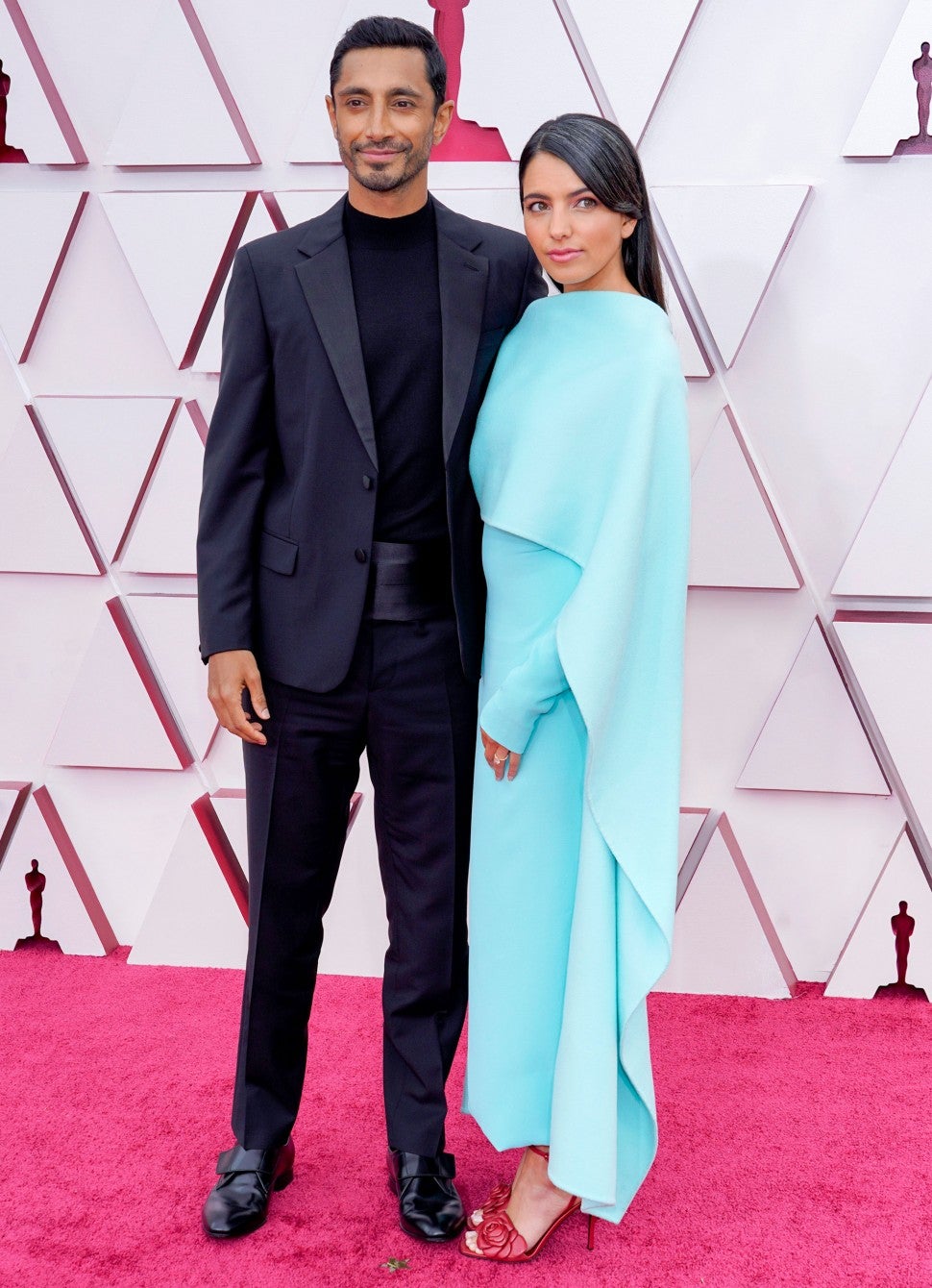 Chloé Zhao was accompanied by her boyfriend, Joshua James Richards. The director wore a cream long-sleeved Hermes dress with white sneakers. Richards, who was also nominated during the Oscars, sported an all-black tux. Zhao took home the Academy Award for Best Director for Nomadland, making her the first woman of color, and second woman ever, to take home the Oscars’ top directing honor. 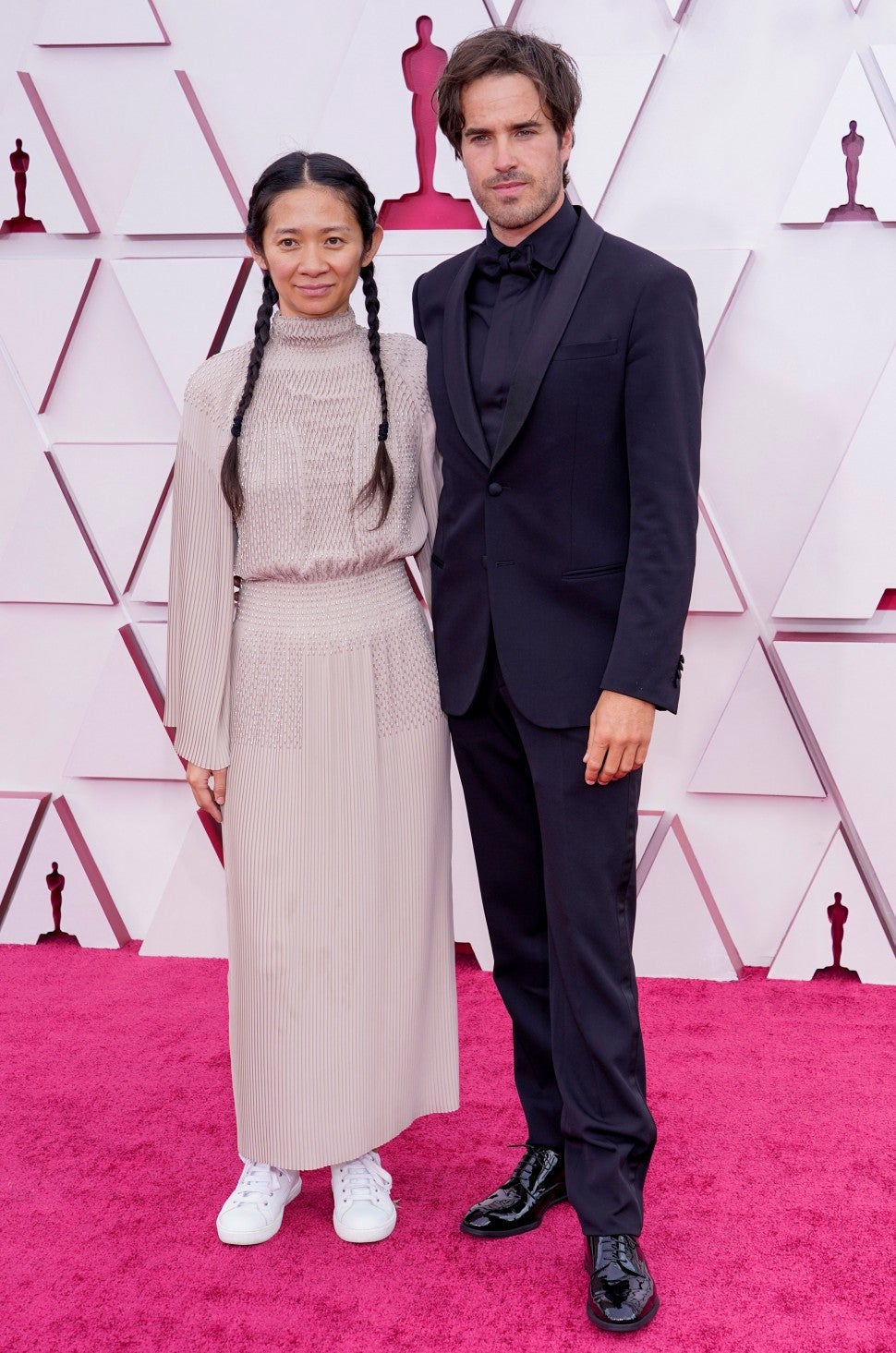 Viola Davis and Julius Tennon opted for a color-coordinated look for the night’s event. The Oscar winner and nominee looked regal in a white Alexander McQueen gown, Forevermark jewelry and satin Stuart Weitzman heels. Tennon, on his end, looked sophisticated in a white-and-black tuxedo. 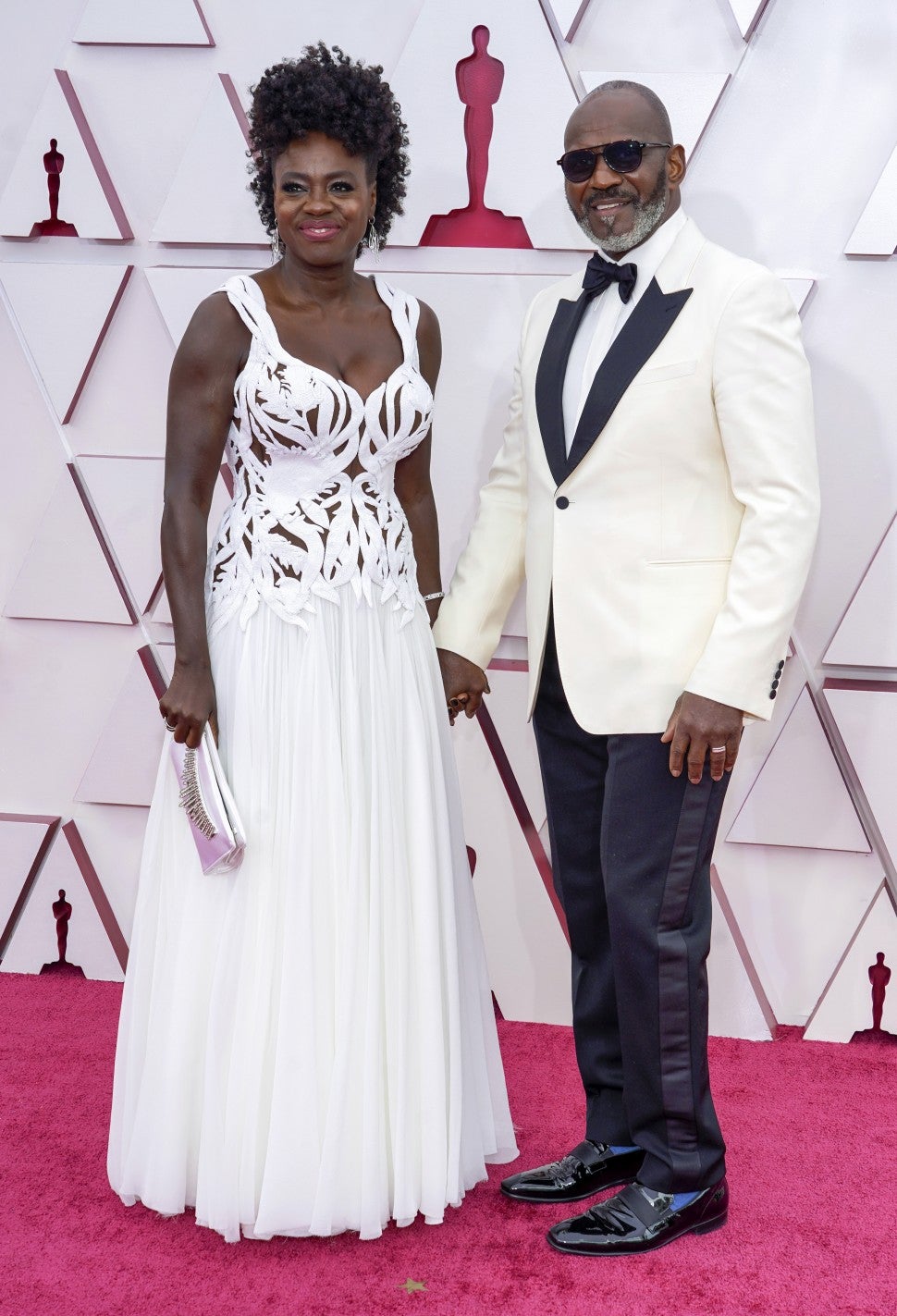 Steven Yeun and Joana Pak were one elegant pair. The Oscar-nominated Minari actor looked impeccable in a black Gucci three-piece tuxedo, while his ladylove was a vision in a black gown. 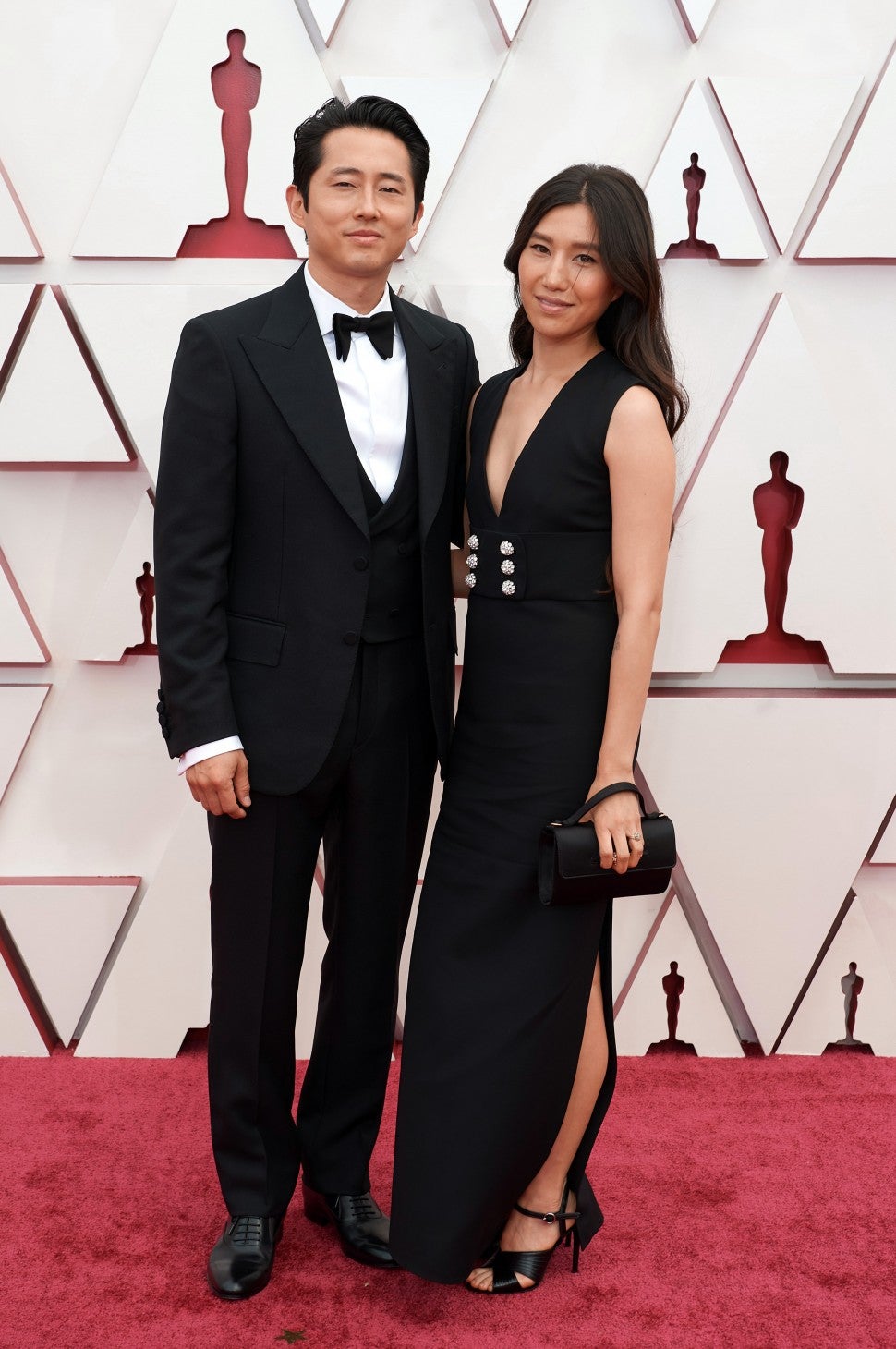 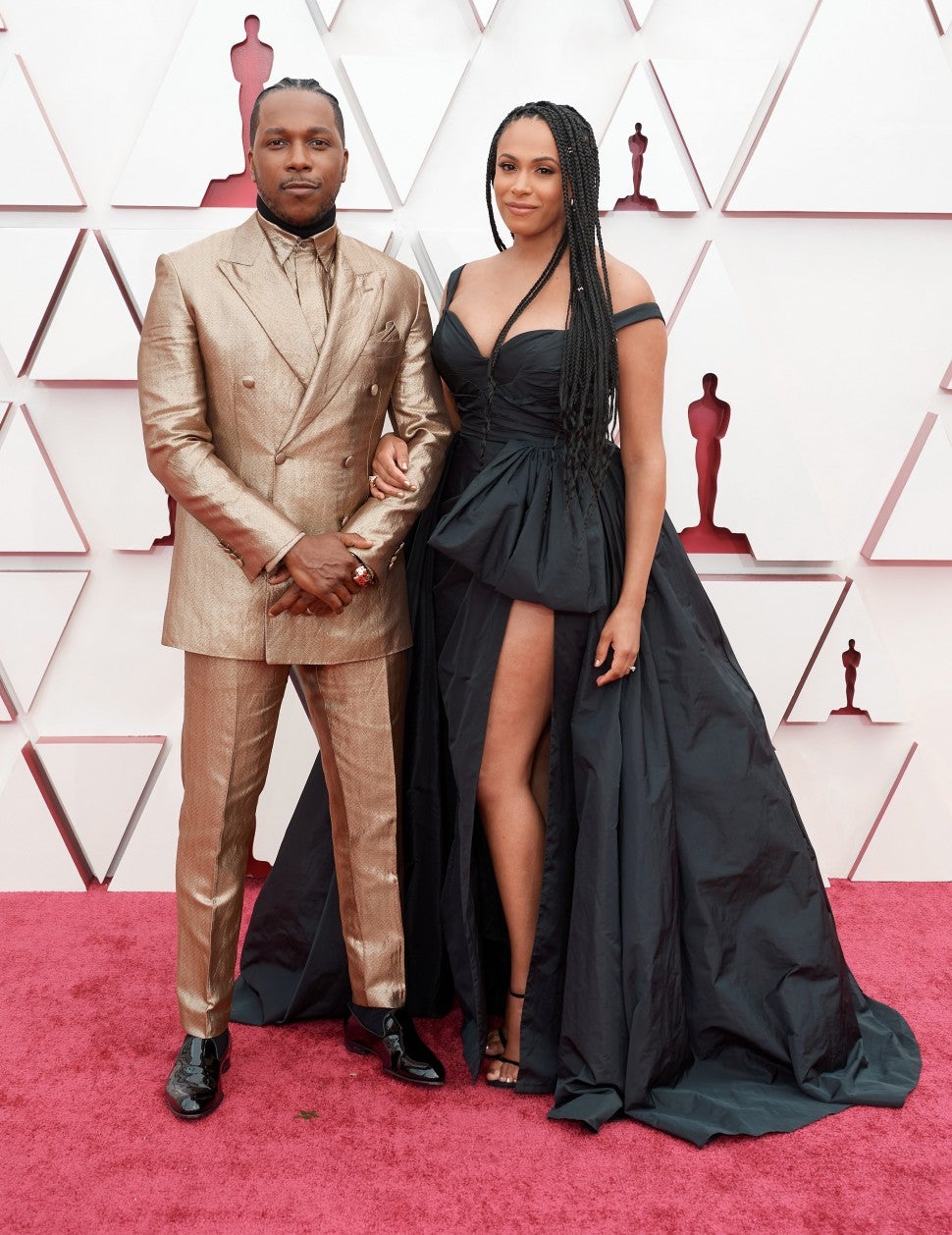 Aaron Sorkin and Paulina Porizkova also made their red carpet debut as a couple. The director, whose movie The Trial of the Chicago 7, is nominated for five Oscars, looked sharp in a classic black tuxedo, while the supermodel looked spectacular in a gold gown. 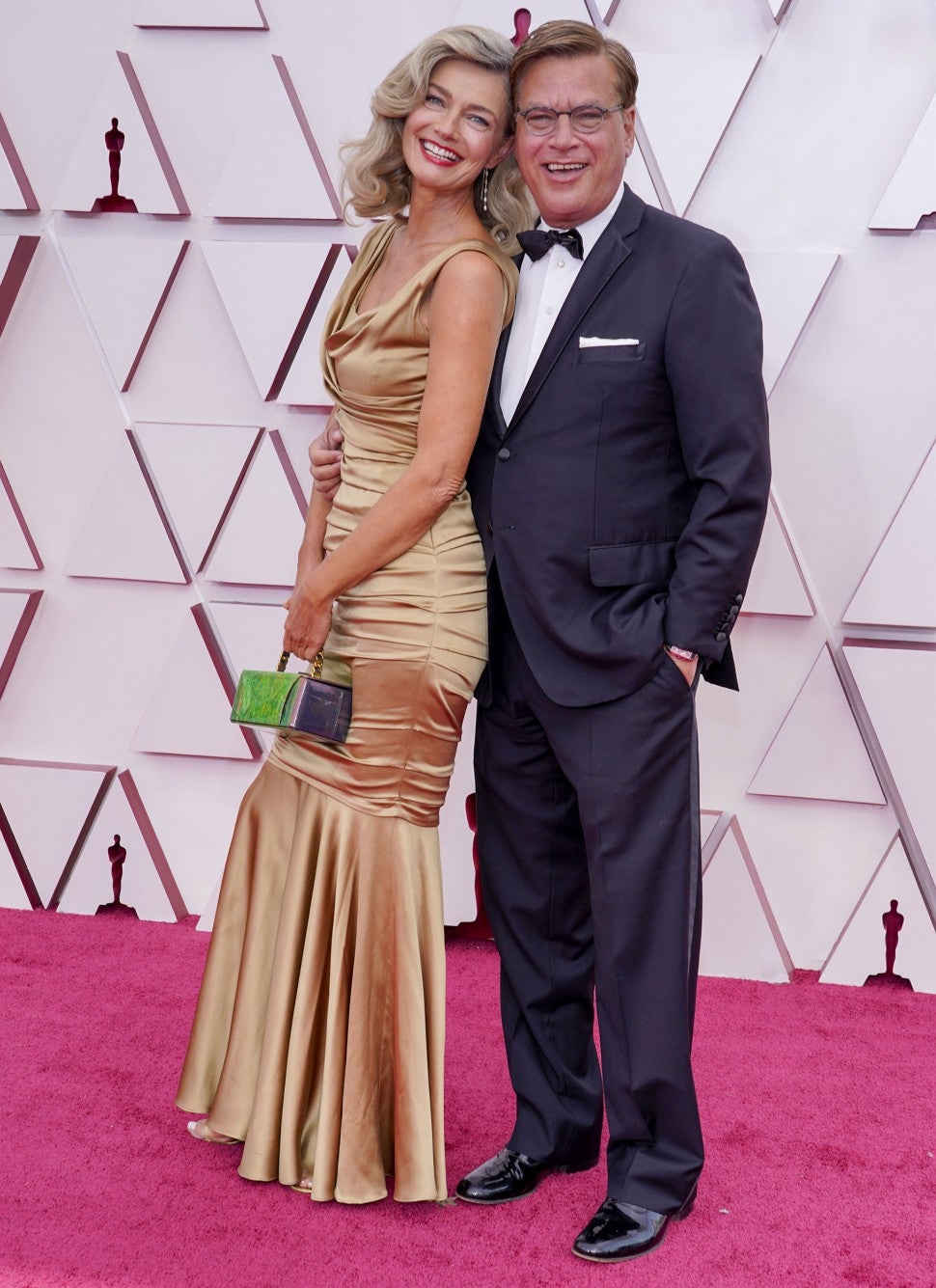 There were also a number of other important duos on the red carpet. Reese Witherspoon and Laura Dern both looked radiant and they attended the awards ceremony together. Witherspoon wowed in a gorgeous belted red gown by Dior, while Dern wore a charming Oscar de la Renta black with white feathered skirt piece.

Andra Day brought her big sister to the celebration. The two posed for photos before the event, with The United States Vs. Billie Holiday Oscar nominee making a statement in a custom gold Vera Wang gown, while her sister looked gorgeous in a navy blue dress. 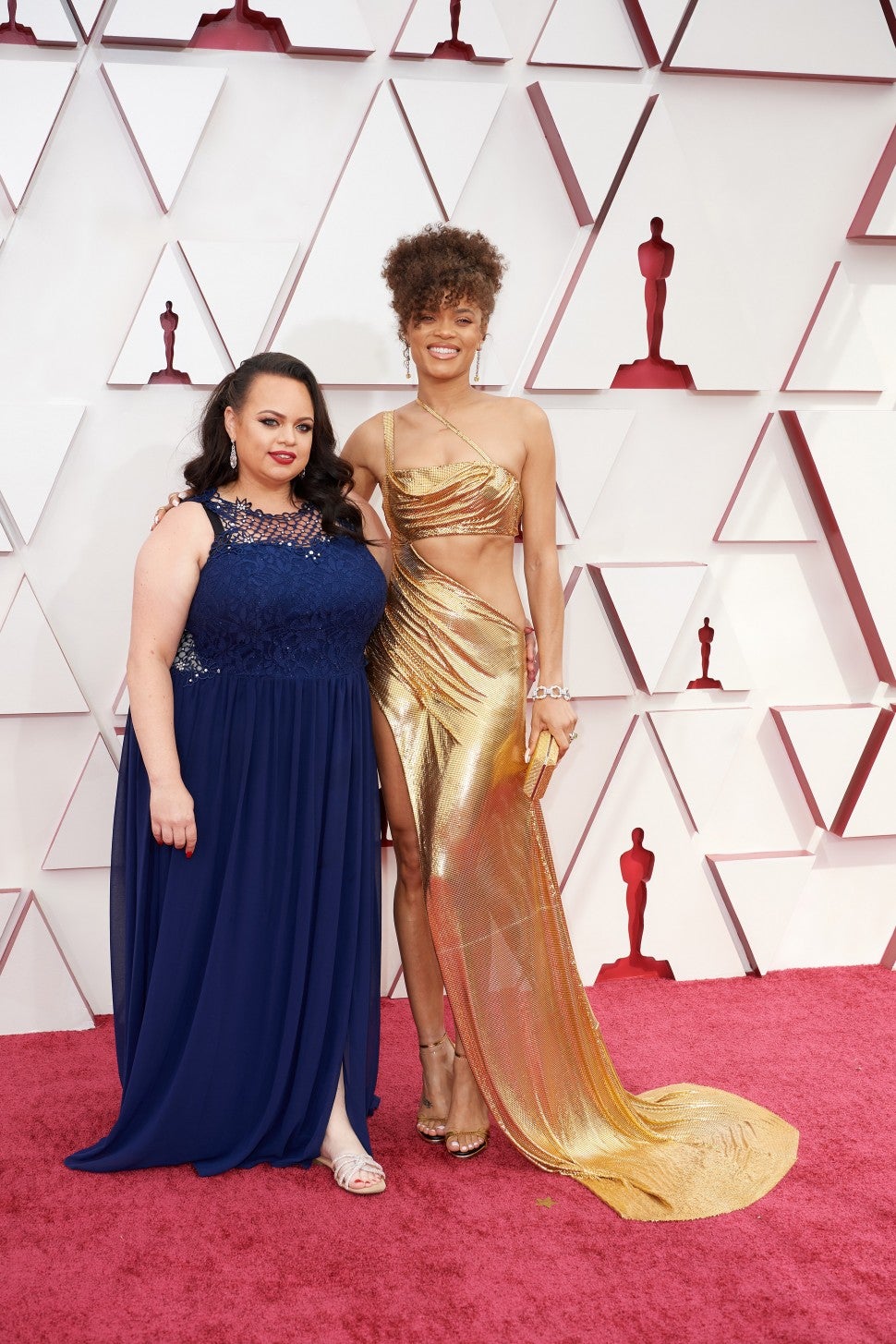 Follow along at ETonline.com for all our Oscars style coverage and live updates, including the Oscars winners list, updated as trophies are handed out.