Scheduled performances by legendary opera singer Placido Domingo were canceled on both coasts Tuesday as the Los Angeles Opera announced an investigation into allegations of sexual harassment and inappropriate behavior against Domingo going back decades.

The Philadelphia Orchestra and San Francisco Opera announced Tuesday they would cancel upcoming performances featuring the star, while New York's Metropolitan Opera said it would await the results of LA Opera's investigation "before making any final decisions about Mr. Domingo's future at the Met." The 78-year-old Spaniard is scheduled to appear at the Met next month in a production of Giuseppe Verdi's opera "Macbeth."

The cancelations came hours after The Associated Press published a story in which numerous women that Domingo used his power at the LA company and elsewhere to try to pressure them into sexual relationships, with several saying that he dangled jobs and then sometimes punished them professionally if they refused his advances. All but one of the accusers, who said they were inspired to come forward by the #MeToo movement, spoke to the AP anonymously.

The Oct. 6 show in San Francisco had been scheduled to mark Domingo’s 50th anniversary of performing with the San Francisco Opera. It had been promoted as a “special one performance-only event” with “one of the most influential singing actors in the history of opera.”

SF Opera said in a statement that even though no inappropriate behavior was alleged to have taken place in San Francisco, the company is “committed to its strong anti-sexual harassment policy and requires all company members to adhere to the highest standards of professional conduct.”

The Philadelphia Orchestra also rescinded an invitation for Domingo appear at its opening night concert next month, saying: "We are committed to providing a safe, supportive, respectful, and appropriate environment for the orchestra and staff, for collaborating artists and composers, and for our audiences and communities."

LA Opera, where Domingo has served as general director since 2003, said Tuesday it would hire outside counsel to investigate the allegations against the star. Several women in the AP story recounted incidents that they said occurred while working with Domingo at the Los Angeles company, including one woman who told the AP that he stuck his hand down her skirt after urging her to come sing an aria for him at his apartment. 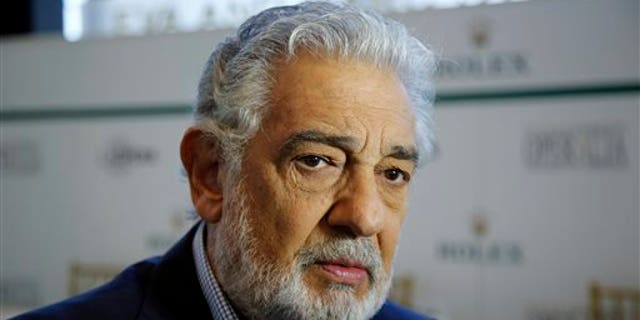 For decades, Placido Domingo, one of the most celebrated and powerful men in opera, has tried to pressure women into sexual relationships by dangling jobs and then sometimes punishing the women professionally when they refused his advances, numerous accusers told The Associated Press. (AP Photo/Damian Dovarganes, File)

LA Opera's statement noted that Domingo has been “a dynamic creative force in the life of LA Opera” for more than three decades, adding, “We believe all employees and artists should be treated respectfully and feel safe and secure within their work environment.”

Domingo has called the allegations “deeply troubling and, as presented inaccurate,” adding, “I believed that all of my interactions and relationships were always welcomed and consensual.”

Domingo noted: “Still, it is painful to hear that I may have upset anyone or made them feel uncomfortable.”

At the Salzburg Festival in Austria, where Domingo is scheduled to appear Aug. 31 — his next scheduled performance — festival president Helga Rabl-Stadler said organizers agreed he should appear as planned.

"I have known Placido Domingo for more than 25 years," Rabl-Stadler said in a statement. "In addition to his artistic competence, I was impressed from the very beginning by his appreciative treatment of all festival employees."

"I would find it factually wrong and morally irresponsible to make irreversible judgments at this point," she said.