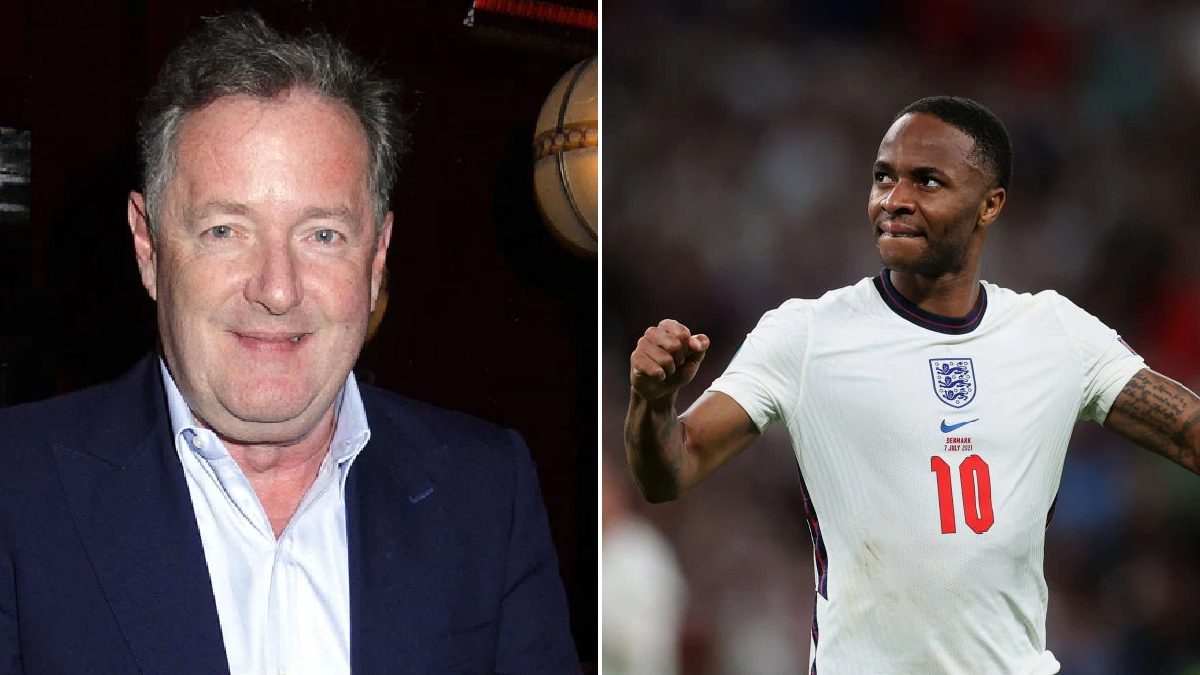 Piers Morgan has revealed he’s been texting England footballer Raheem Sterling ahead of tonight’s Euro 2020 final, because why not?

England is set to take on Italy this evening, with rowdy fans already causing chaos in central London before the big game and getting in huge queues at the pubs.

Getting in the spirit of it all, former Good Morning Britain presenter Piers made the casual revelation as he clapped back at a fan who claimed he ‘attacked’ Sterling and ‘called the players “woke”.’

‘a) I’ll be in the main crowd, not a box,’ Piers wrote. ‘b) I never called the players woke & have always supported them taking the knee.

‘c) I get on very well with Raheem.. in fact we were texting each other last night.’

He added: ‘You’re right about one thing though – I’ll be cheering England on.’

While they may be on texting terms now, Piers and Raheem do have a history, with the journalist making a salty remark about his £49million move to Manchester City from Liverpool in 2015.

At the time, Piers wrote: ‘If Raheem Sterling’s worth £49million then I’m an Aardvark.’

Raheem addressed the post last summer, five years after the original tweet, writing: ‘Now this is even funnier Piers’, alongside crying-laughing emojis.

‘Haha, touche! I meant you were worth a lot MORE than £49million, Raheem… obviously,’ Piers replied.

The England team has pledged to do ‘everything we can’ to make history with a Euro 2020 final win, as anticipation builds across the country ahead of the crunch clash against Italy.

Three Lions manager Gareth Southgate thanked fans for their ‘incredible support’ throughout the tournament, which has seen the England team reach their first major final in more than half a century.

Good luck messages have been sent by the Queen, the Duke of Cambridge, the Prime Minister and even Hollywood star Tom Cruise, as the players prepare for an epic showdown at Wembley Stadium.

In a video message on the official England football Twitter account, Southgate – who has been praised for his leadership of the team – said the fans’ support has given them a ‘huge lift’.

He said: ‘We hope that you’ve enjoyed watching us play. I’m very grateful to all of the players and the incredible staff I’ve got with me, that we’ve been able to get to our first final for 55 years.

‘But of course we know now we’ve got to deliver for you, so we’ll be doing everything we can. Your support and energy has given us a huge lift, and I know it will on Sunday.’