The Voice: Olly Murs puts his fingers in his ears

The Voice UK judge Olly Murs, 36, regularly interacts with his fans on Twitter during and after the show and tonight, he celebrated finalising his team on the show. The singer proudly showed off his final 10 contestants following weeks of auditions. Alongside a graphic of his team, he wrote: “Team completed Voice 2021 my chosen 10,” followed by their respective Twitter handles.

But, it appeared as though the coach got the year wrong and wrote 2020 instead.

The singer followed up his post saying he got confused with dates after filming the show in 2020.

Olly added: “2021 [laughing face] no edit button on this FFS in my defence we filmed it last year.” 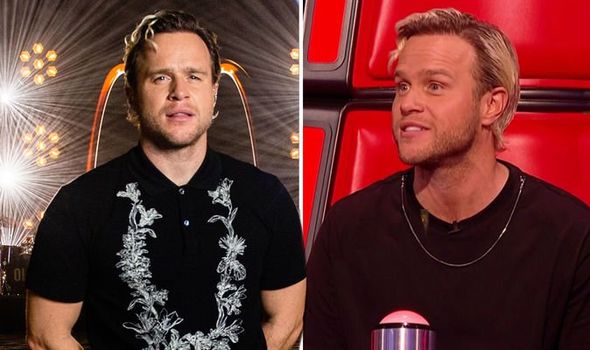 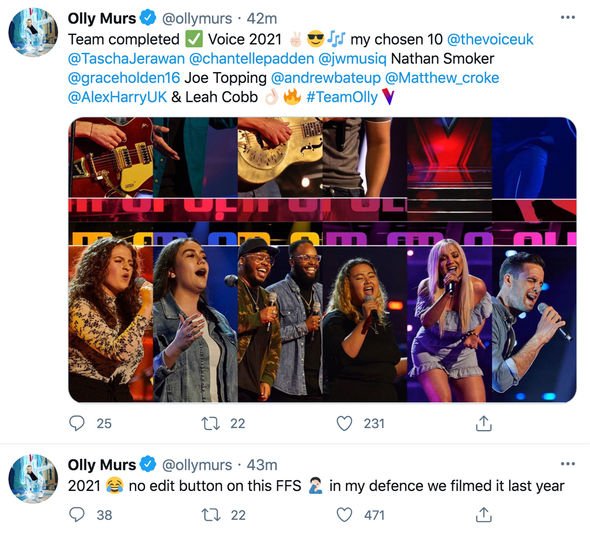 One user wrote: “Did it really take you half an hour to remember what year we are in?”

“Not gonna lie i didn’t even notice until you mentioned it,” a second commented. 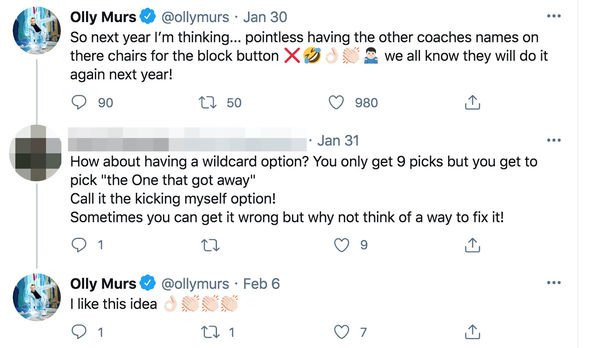 This year on the show, new block buttons were introduced to the coaches.

The button allows each coach to stop one of their fellow mentors from adding a particular singer to their team – but all four of them can only use the button once.

Addressing the change last month, he wrote: “So next year I’m thinking… pointless having the other coaches names on there chairs for the block button.(sic)

“We all know they will do it again next year!”

A fan of the show suggested producers should instead introduce a “wildcard option” in which the coaches will be able to win back an act they didn’t turn around for.

Intrigued at the thought, Olly replied: “I like this idea.”

Last month, the singer addressed backlash about a “habit” of his that had been picked up by viewers.

Olly is a coach on the show alongside will.i.am, Anne-Marie and Sir Tom Jones.

To celebrate his two previous wins on the show, he posed on social media.

Host Emma Willis said she believes he is keen to win the show for a third time so he can get his kit off again.

She told The Sun: “I don’t know what he will do next. He sat on the big red chair naked.

“I think he quite likes getting naked. He doesn’t care. I think Olly wants to win again just for that reason.”

The Voice UK continues next week at 8.35pm on ITV.