Gillian McKeith, 61, has been vocally against lockdown restrictions during the entire coronavirus pandemic, and today insisted she was “proud to be a Londoner” after thousands took part in demonstrations against lockdown measures in the capital. The former You Are What You Eat host was labelled “self-indulgent” by some of her Twitter followers over her controversial remarks, as only half the nation has been vaccinated against the deadly bug so far.

Sharing snaps of the march happening in London, Gillian praised those who took a stand against the Government.

She typed: “It is time to stand up. And London has finally come through.

“London takes back freedom. Proud to be a Londoner…”

She then posted a final follow-up tweet, writing: “London shows some muscle FINALLY.” 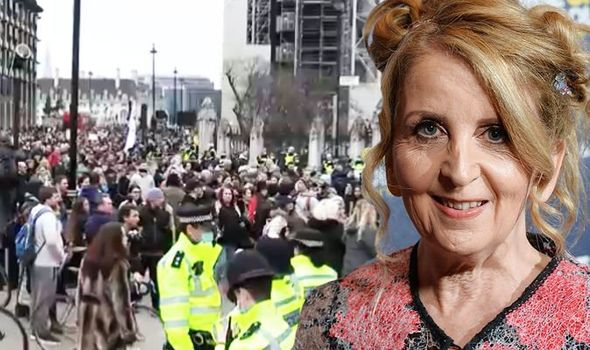 Gillian went on: “THOUSANDS demand an end to the lockdowns, an end to destroying businesses and livelihood, an end to the madness…. #EndTheLockdown #londonprotests #antilockdownprotest.

“They have come in their THOUSANDS. London has woken up from a deep slumber. NOW it is time to demand freedom.

The nutritionist’s views left her Twitter followers divided, as some feared the protest could now see numbers of Covid cases rise up once more.

One said: “Freedom? What’s freedom got to do with prioritising lives in a pandemic? What is it with these people.”

“We’ve got a roadmap for coming out of lockdown. So self-indulgent,” another fumed.

While a third added: “Oh for crying out loud the vaccinations meant things would open up a bit.”

A fourth wrote: “This whole stunt could cause the numbers to go up again.”

Another added: “I’m equally proud to be a Londoner having no part of this idiocy.”

The UK death toll from the virus has risen to more than 120,000 since the start of the pandemic over a year ago.

Joining in Gillian’s anti-lockdown sentiment is fellow celebrity, Laurence Fox who joined the protest in London today and urged Boris Johnson to “open the country up”.

On his Twitter, the Lewis actor wrote: “Open the country. Stop moving the goalposts.

“We are perfectly poised to get ahead at this crucial time. Our liberty is not your property.”

Following this post, Laurence shared a number of photographs from today’s demonstration including a video of maskless protesters high fiving a bus driver.

It comes as the star had previously explained he was standing for London mayor to lift lockdown straight away.

He told The Daily Telegraph: “I am standing for London mayor. With almost all older and vulnerable people having got their jab, I want the lockdown lifted straight away.”