Back in 2018, then-President Donald Trump and first lady Melania were boarding a plane to head to Texas to go to a facility where immigrant children were being detained. Melania infamously wore an army green jacket with the phrase “I don’t really care, do U?” emblazoned on the back in white. This seemed tone-deaf at best and downright problematic at worst. At the time, the president tweeted out that the message was aimed at the “Fake News Media,” per the New York Times.

The irony, of course, is that Melania is an immigrant herself. At the time, the first lady’s office said, “It’s just a jacket,” according to the NYT. But the press (and the public) were highly critical of Melania’s style choice and pointed out that as a former fashion model she has a deep understanding of her own image, and how the choices she makes in clothing reinforce that.

Now, current first lady Dr. Jill Biden has donned a jacket with a phrase on the back, too — and it’s in stark contrast to the message Melania sent. 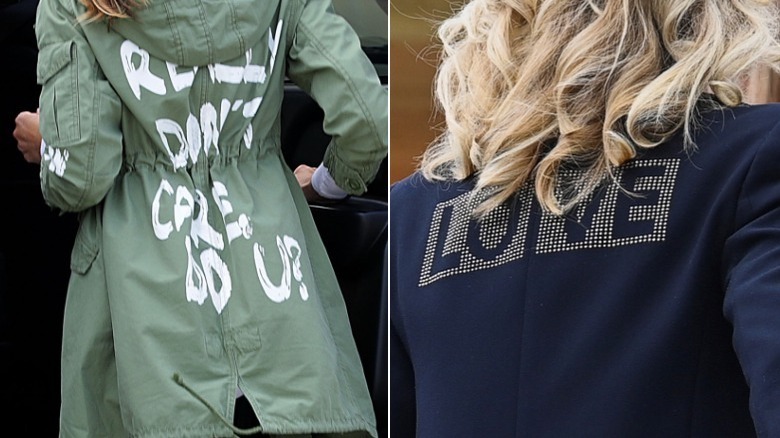 On a June 10 diplomatic trip to the U.K., Dr. Jill Biden wore a dark jacket with the word “LOVE” outlined on the back in silver beading. Was she throwing shade at Melania Trump with this fashion choice?

Dr. Biden accompanied her husband, President Joe Biden, to England and sported the jacket during a meeting with President Biden and British Prime Minister Boris Johnson and his wife Carrie.

Reporters asked her, “Can you explain the message on the back of your jacket?” Per C-SPAN, Dr. Biden said, “Oh, the love? I think that we’re bringing love from America.” She went on to say, per Today, “This is a global conference, and we’re trying to bring unity across the globe. And I think that’s important right now that people feel a sense of unity for all the countries and feel a sense of hope after this year of the pandemic.”

Though Dr. Biden did not mention the former first lady when delivering her remarks, all of Twitter seems to think that it was a jab at Melania’s own ensemble. The contrasting coats certainly highlight the stark differences between the two first ladies, if not the two administrations of former President Trump and President Biden.