Granger Smith is “devastated and heartbroken” to announce the death of his youngest son, River Kelly Smith.

The country star took to social media on Thursday to share the unthinkable news with his followers, explaining that the three-year-old suffered a “tragic accident” and was unfortunately “unable to be revived” by doctors.

Granger didn’t go into more detail, but he noted that he and his wife Amber Smith “made the decision to say our last goodbyes and donate his organs so that other children will be given a second chance at life.”

“I have to deliver unthinkable news. We’ve lost our youngest son, River Kelly Smith. Following a tragic accident, and despite doctor’s best efforts, he was unable to be revived. Amber and I made the decision to say our last goodbyes and donate his organs so that other children will be given a second chance at life.

Our family is devastated and heartbroken, but we take solace in knowing he is with his Heavenly Father. Riv was special. Everyone that met him knew that immediately. The joy he brought to our lives cannot be expressed and his light will be forever in our hearts.”

While the singer admitted he couldn’t say much more about the tragedy at that moment, he offered the following message to his fans:

“Love the ones close to you. There has never been a more difficult moment for us than this.”

Wow. We can’t even imagine the pain Granger and his family must be going through right now.

“In lieu of flowers or gifts, please send donations to Dell Children’s Medical Center in River’s name. The doctors, nurses and staff have been incredible.”

The message received an outpouring of love and support from fans and friends — not to mention, fellow country stars like Maren Morris and Jason Aldean.

Amber also shared the devastating news on her social media page, writing alongside the family’s statement:

“Nothing can prepare a mother to deliver this kind of news…” 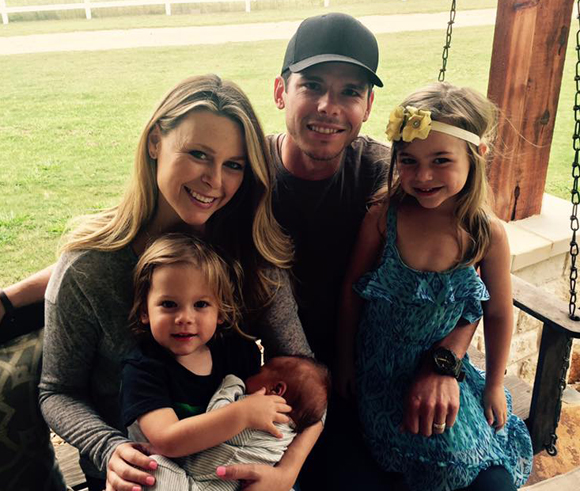 River’s birth was announced by the couple, who are also parents to five-year-old son Lincoln and seven-year-old daughter London, in May 2016 on social media.

At the time, the Backroad Song crooner shared a photo of the family (above) on his Facebook page with the heartfelt caption:

“Heart and hands are full. We added one more boy to the clan. River Kelly Smith has joined his brother and sister!”

So immeasurably heartbreaking. Our thoughts are with Granger and his family at this difficult time.