Charli D’Amelio is getting real with her fans. The TikTok star revealed on her Instagram Story on Thursday that she’s been struggling with an eating disorder.

“I’ve always tried to use my voice when it comes to issues surrounding body image, but I’ve never talked about my own struggles with eating disorders,” D’Amelio wrote. “it’s so uncomfortable to admit to even your closest friends and family, let alone the world.”

“I’ve been afraid to share that i have an eating disorder, but ultimately i hope that by sharing this, i can help someone else. i know eating disorders are something that so many other people are also battling behind closed doors.”

The 16-year-old continued her message by apologizing to those she “unintentionally” hurt by using the song “Prom Queen” by Beach Bunny in a since-deleted TikTok. The song has previously been called out for includes lyrics like, “Shut up, count your calories” and “Wish I, was like you, blue-eyed blondie, perfect body.”

“I deeply and truly apologize and I hope you know that I never intended to cause you harm,” D’Amelio wrote on Thursday, sharing that she didn’t realize lyrics “could have triggered” those watching.

“For anyone struggling with this, I know some days can be worse than others, but I really hope you’ll swipe up and get help if you need it,” she added. “I need you to know you are not alone. Remember it’s ok to reach out and get help. We all need help sometimes.” 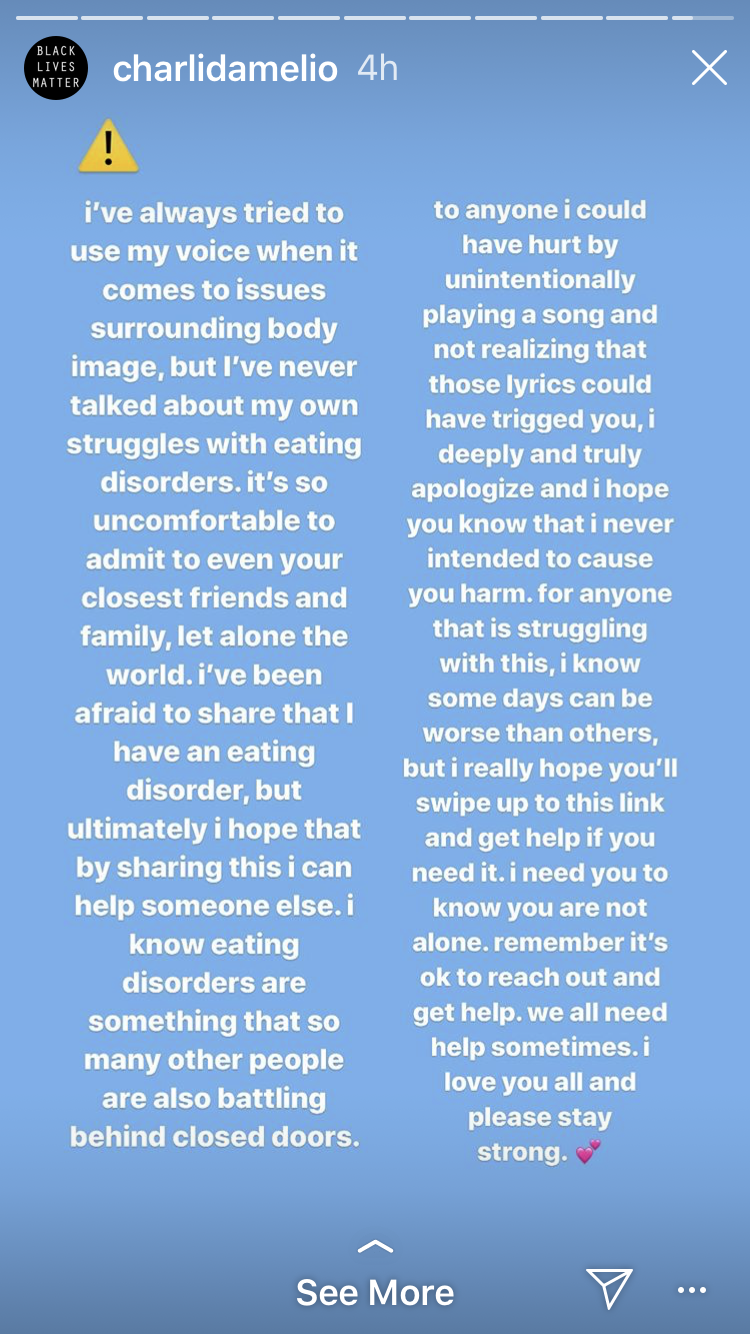 D’Amelio has previously spoken out about fans’ comments on her body.

“It’s not your place to tell me if i’m losing weight or gaining weight,” she wrote on Twitter in April. “why don’t we all just be respectful and understand that we should just be kind and uplift everyone instead of trying to bring others down and i’ve seen these videos about me my friends and complete strangers but it doesn’t matter who you’re doing it to… it’s never okay and I feel like I really needed to say that i love you all but please stop!!”

In a recent interview with ET, fellow TikTok star Addison Rae opened up about how becoming popular on the app had affected her self-esteem, as trolls body shamed her on social media.

“Things like that were really hard for me to handle at first because I wasn’t used to that. Now, I notice myself getting super hard on myself about it and letting that get to me,” she said. “That’s been the hardest part, but there’s so many good parts about this industry and the social media world that it kind of just outweighs it.”

For support, resources and treatment options for those struggling with eating disorders, visit www.nationaleatingdisorders.org or call (800) 931-2237.