New York: Cardi B has made a court appearance in a case stemming from a fight at a New York strip club.

The Grammy-winning rapper appeared somber and did not speak during Friday's hearing. She is due back in court on August 9.

Prosecutors said they would present the case to a grand jury. 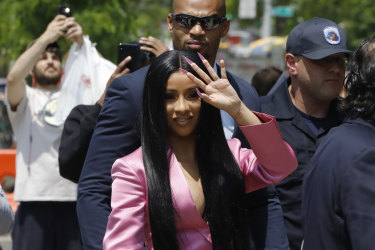 Cardi B arrives at Queens Criminal Court on Friday. Credit:AP

Police say Cardi B, whose real name is Belcalis Almanzar, was with her entourage at a Queens strip club last fall when she argued with a bartender.

They say a fight broke out in which chairs and bottles were thrown. Two people suffered minor injuries. Cardi B's lawyer has she didn't harm anybody.

The entertainer wore a pink pantsuit and sparkling pink fingernails to Friday's hearing.

Fans followed her out of the courtroom trying to get photos.